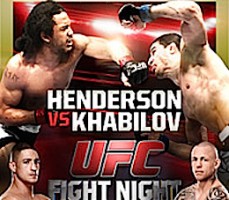 ProMMAnow.com will provide LIVE results of all the action starting with the prelims at 7:30 p.m. ET. We will also provide LIVE play-by-play commentary of the main card starting at 10 p.m. ET.

Take a look at our Staff Picks to see our predictions for UFC Fight Night 42.

Round 1 – Caraway gets booed. Cheers for Perez who is from Albuquerque. Caraway blocks a high kick. Leg kick from Perez. Overhand left from Caraway. Caraway ducks in for a takedown, stuffed. Perez clinches up against the cage, dropping levels for the double and puts Caraway on his back but gets stuck in a guillotine. Perez pops out and Caraway pops to his feet. Leg kick Perez. Jab from Caraway, then a right. Jump knee from Perez to the body. Brief clinch. Caraway catches a high kick and dumps Perez on his back. Perez takes his back and locks on a body triangle, looking for the choke. Now with one hook in as Perez tries to peel the hook out. Both hooks in now. Perez is able to escape to top position, inside guard. Body shots from Perez. Caraway gets up, lands a short uppercut on the break. He ducks right into a knee from Perez though and Perez is landing some punches. Caraway shoots in, looking for the single, gets Perez down briefly, eats a spin elbow as Perez gets up. PMN sees it 10-9 Perez.

Round 2 – Couple jabs from Caraway. Perez fires back then scores a takedown. Caraway sweeps immediately from butterfly guard, now in side mount, now half guard. Caraway passes to mount, Perez gives up his back. Caraway looking for the choke with a body triangle locked on Perez’s waist. Caraway locks it up as Perez fights to get free. Perez taps out.

Round 2 – Hallmann comes out swinging and after a couple shots Edwards takes yet another finger in the eye. This shit has to stop guys. Ref warns Hallman yet again, but no point is taken. Hallmann presses in with strikes, goes for the single, stuffed. Left hook from Hallmann, elbow from Edwards. They trade body kicks, then Hallmann takes a poke to the eye. That’s the THIRD eye poke in this fight. WHAT THE F*CK??? Left hook from Hallmann. Right hook from Edwards, knee to the body from Hallmann who clinches up looking for the takedown, lands a knee to the body on the break. Inside leg kick. Edwards checks the next one. Hallmann with constant pressure, goes for the single, stuffed. Edwards pushes him to the cage. Body kick from Edwards, he gets a body lock from the back, against the cage. Edwards tries to take his back, but slips to the canvas and Hallmann is now on top in guard. Hallmann works the ground and pound, cuts Edwards open. Edwards gets to his feet but quickly is taken down again. Hallmann back on top in half guard and landing shots. Edwards gives up his back and gets to his feet. Hallmann pressing him to the cage with knees and strikes. PMN sees it 10-9 Hallmann as Edwards fades.

Round 3 – Left hook from Hallmann. Front kick, pressing forward still. Goes for a single leg, but Edwards defends. Nice knee to the body from Edwards stops Hallmann’s forward momentum. Hallmann shoots again, stuffed. They trade a few shots in the pocket before Hallmann presses him to the cage. Drops levels and gets the single leg takedown. Edwards gets to his knees but Hallmann is able to put him back on his back. Hallmann takes his back and locks in the choke and Edwards taps out VERY quickly. I think he knew he was done and just looked for a way out there.

Round 1 – Touch gloves. One two from High. Right and left hooks from High. High blocks a high kick, counters with a couple punches that miss the mark. High presses dos Anjos to the cage, picks him up for a slam. Dos Anjos gets up, takes a knee to the body as High picks him up for a slam. High inside full guard. Dos Anjos looking to set up a triangle. High postures up, moves to half guard. RDA looking for a kimura, High powers out. High staying heavy on the Brazilian. Dos Anjos uses a kimura to sweep and get to his feet, but eats a left hand and an elbow. Nice body shot from RDA, then a left and a right. Big body kick. High with a left. Body kick from RDA. Left hand, lands another left solid, then puts High on his back who is looking a bit fatigued. RDA now on top in half guard, looking for a kimura. He lands a couple hammerfists after complaining High is holding his own shorts — which is allowed. PMN sees it 10-9 for RDA.

Round 2 – High breathing heavy between rounds. Head kick from High. Body kick then a left hand from RDA that stuns High and knocks him off balance. High then takes a finger to the eye – the FOURTH OF THE NIGHT – and time is called. Left hook from High. Body shot from RDA. High is able to secure a single leg takedown, but RDA gets to his feet. Jumping knee from RDA. Body kick. BIG leg kick. Left hand. High’s punches slowing. Nice left from RDA, he then scoops up a double leg takedown, and is in side mount. RDA dropping short elbows. High gets to his knees and feet. RDA jumps on an arm in guillotine, but High defends and takes RDA’s back. RDA gets to his feet as High body locks him against the cage. RDA breaks free, turns High around, lands a knee to the body. Right from High, he then lands a couple more shots. RDA drops High with a big left hand right to the jaw, he jumps on him with big hammerfists and the ref stops it. Hard to tell if High was out. Apparently not as he is quickly to his feet, walking around.

Round 2 – Left hand from Dodson. Body kick from Dodson. Leg kick. Big inside leg kick from Moraga. Overhand right from Moraga, another. Dodson is able to put him on his back though and is landing body shots. Dodson postures up with a punch. Moraga springs to his feet. Body kick from Moraga. Again. Left from Dodson. Right from Moraga. Dodson not being very active. Looks like he’s looking for the KO. Misses a big hook. Knee and left hand. Front kick from Dodson. Dodson lands a body kick / knee to the nose that hurts Moraga and he drops to the mat. Dodson pounces and tries to finish, landing big punches. Moraga bleeding but ties Dodson up in guard until the remaining seconds of the round run down. PMN sees it 10-9 Dodson. They stopped the fight between rounds, apparently Moraga has a broken nose.

This is the first fight I think I’ve ever seen stopped due to a broken nose.

Round 1 – Touch gloves. Couple rights from Rustam. Clinch, knee from Rustam, trips Bendo, back up and Bendo lands a body shot on the break. Body kick from Bendo, jab from Rustam. Right and a left from Rustam. Bendo backs him up with punches but Rustam is able to score the takedown. Rustam with a body lock from the back as Bendo gets up. Rustam looks for the suplex but Bendo is able to defend it by hooking the leg. Slick. Or Smoothe, rather. Nice counter right elbow from Rustam. Nice right follows. Nice left from Bendo, shoots, stuffed. Bendo goes for a double kick but gets caught mid-air and slammed on his back. Close round.

Round 2 – Leg kick from Rustam. Spinning back fist from Rustam but eats a counter punch or two from Bendo. Right from Rustam. Clinched up for a moment before squaring up again. Right from Rustam counters a knee attempt. Rustam puts Bendo on his back but can’t capitalize and Bendo is able to kick him off and get right up. Bendo gets a body lock, takes Rustam down and locks on a body triangle from the back, looking for the choke. Rustam escapes to his feet, Bendo presses him to the cage looking for the takedown. Rustam goes for a judo throw, does not work completely but gets Bendo to his knees. Big leg kick from Bendo. Again. Counter right from Rustam. PMN sees it 10-9 Bendo.

Round 4 – Right from Rustam. Bendo with the body lock, Rustam breaks out. Lead uppercut from Bendo stuns Rustam and he goes to a knee. Bendo jumps on his back and sinks in the choke quickly forcing the tap out. The big news here is that Benson Henderson just finished his first ever fight inside the UFC.