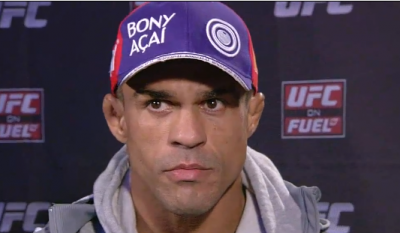 Wanderlei Silva is out of his scheduled match-up against his arch nemesis Chael Sonnen at UFC 175, apparently due to some issue with his medicals.

Sonnen said on UFC Tonight that he found out Wanderlei “literally ran from a drug test” and that’s the reason the fight is off.

Sonnen told us this was going to happen, remember?

What he didn’t tell us though was who would be replacing Wanderlei. Sonnen will now face fellow former TRT user Vitor Belfort on the July 5th card in Las Vegas.

It will be both fighters first bout since the Nevada State Athletic Commission stopped accepting exemptions for Testosterone Replacement Therapy (TRT).

Sonnen has only won one of his last four outings — “Shogun” Rua last August, while Belfort has knocked out his last three opponents. This definitely seems like a tougher fight for everyone’s favorite trash-talker.

Both Sonnen and Belfort are ranked in the UFC Light Heavyweight division, with Sonnen sitting at number nine, and Belfort at 13. Belfort is also ranked at number two in the Middleweight division, and although this bout against Sonnen will be fought at 205 lbs., the winner is supposed to get a crack at the 185-pound title — according to Sonnen.