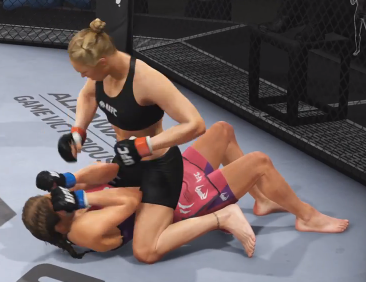 We’ve seen plenty of gameplay from the EA Sports UFC video game so far. But now take a look at how submissions will work; how to submit your opponent, and how to defend submission attempts. Watch as UFC women’s bantamweight champ Ronda Rousey tries out her infamous arm bar on her arch rival Miesha Tate. Just like in real life, Tate was able to defend the arm bar at first, but in the end… it’s tap or snap.

I have to say, the submission mechanics in the EA Sports UFC game look much improved over the old UFC Undisputed games made by THQ. From the looks of it, it seems much more intuitive and less clunky than the THQ games. EA Sports UFC is due for release on June 17th. We already have our pre-order in (yes, I wanted the Bruce Lee character unlocked from Day 1), so be sure to check back for our full review of the game.
[ads1]
[ads2]