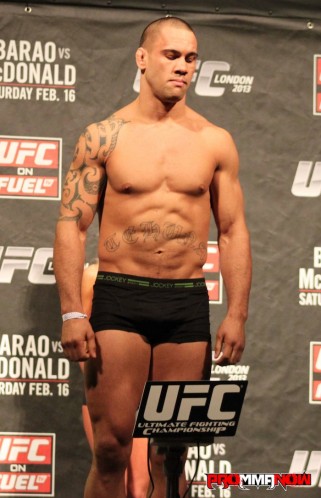 UFC officials have announced that the promotion will make its debut in New Zealand for the first time in over 20 years of existence. The event will take place on June 28 at the Vector Arena in Auckland, New Zealand. The event will be headlined by hometown fighter James Te Huna (16-7) as he has agreed to take on former Strikeforce welterweight champion Nate Marquardt (32-13-2) in a five round middleweight bout.

Tom Wright, UFC® Managing Director New Zealand, Australia and Canada said: “We are very excited about the UFC’s debut event in New Zealand. This country has a proud and successful combat sports history and certainly punches above its weight with representation in the UFC.

“We’re coming with a card featuring some of the greatest international and local fighters in mixed martial arts. Kiwis love their sport, and we have a great fan base already in New Zealand with mixed martial arts becoming increasingly popular,” said Wright.

Te Huna is coming off a first round TKO loss against former champion Mauricio “Shogun” Rua in a light heavyweight bout. This fight will mark his middleweight debut. Marquardt is coming off a KO loss against Hector Lombard at UFC 166 in a welterweight bout, but he did challenge for the UFC middleweight title in 2007 against Anderson Silva in a losing effort. Both fighters have lost multiple fights in a row and are in dire need of wins, which is probably the reason for the switching of weight classes.

UFC fighters Mark Hunt, Dylan Andrews, and Robert Whittaker are also expected to be on the card. Stay tuned to ProMMAnow.com for news and coverage of the UFC’s first foray to New Zealand.