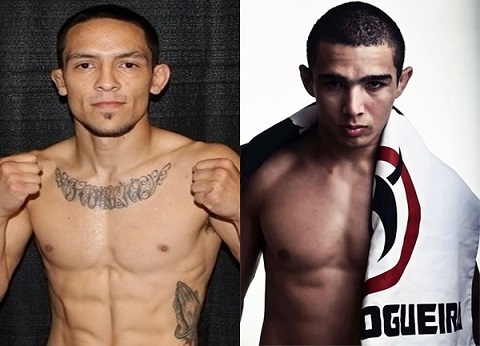 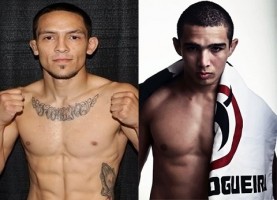 “I’m excited to bring the biggest MMA event to the state of Wyoming since UFC 6 went there 19 years ago,” stated Soares. “Matt Manzanares and Mark Dickman are two of the most exciting fighters in RFA history and Leandro Higo and Raoni Barcelos are two of the most talented prospects in Brazil. Manzanares vs. Higo will make an outstanding flyweight title fight and the winner of Dickman vs. Barcelos will fight for the featherweight title in their next bout.”

Tickets for RFA 14 – Manzanares vs. Higo are available for purchase NOW through www.CageTix.com. Tickets start at $25 and a Student or Military ID will receive an additional $5 discount.

Manzanares (7-2) has established himself as a regular RFA fan favorite by being one of the most exciting fighters in RFA history. After finishing collegiate wrestler Kevin Gray with a flying knee KO at RFA 5 and the highly-touted Steve Swanson with an armbar at RFA 9, Manzanares fought former bantamweight world champion Zach Makovsky for the RFA flyweight title at RFA 11 in November. Though the judge’s decision did not go his way, he showed a tremendous amount of heart and skill that can compete with anyone in the world. Makovsky was subsequently signed by the UFC just days after fighting Manzanares and now finds himself in the mix for a UFC title shot.

After nearly missing out on the RFA flyweight world title in his last outing, Manzanares will lean on the experience of fighting Makovsky, as well as world champions Victor Ortiz and Devon Alexander who he fought during his Junior Olympic boxing career, to help get his hand raised against the world’s #1 ranked flyweight prospect at RFA 14.

“I’m ecstatic to be fighting for the RFA world title in my hometown in front of all of my friends and family,” Manzanares explained. “Leandro Higo is a very well-rounded fighter from a great camp. His jiu-jitsu is really good, but he’s also very aggressive and likes to bang, which plays more into my favor. I feel very blessed for this opportunity. RFA sees something in me and they believe in me. I want to prove them right by winning the world title right here in Cheyenne.”

Higo (13-2) will be making his American-soil debut amid a wave of fanfare and anticipation after establishing himself as the top flyweight prospect in the world in the annual MMASun.com prospect spotlight rankings. Higo did this by earning 13 wins in the bantamweight and flyweight divisions of the Brazilian MMA scene, which includes 11 stoppages. His pedigree is also second-to-none after being groomed by two of the most famous pairs of siblings in Brazilian MMA: the Nogueira Brothers and the Pitbull Brothers. Higo is also trained by Netinho Pegado, the father of UFC bantamweight champion Renan Barão.

After struggling to find fights at flyweight in Brazil, the Coliseu Extreme Fight bantamweight champion is excited about returning to his natural 125-pound weight class in his international debut at RFA 14 on Friday, April 11th.

“RFA is a great event and I hope to be very successful in it. I believe I can get a great exposure and the recognition of people and fighters all around the world by winning the belt,” stated Higo. “I know Matt Manzanares is a skilled fighter and was able to go five rounds with Zach Makovsky for RFA’s title. I’m sure we’ll have a great fight.”

The co-main event of RFA 14 shares a very similar story line as one of RFA’s most popular fighters Mark Dickman (8-1), who has been a part of the promotion since its inaugural event, returns to face Brazil’s top-ranked featherweight prospect in Raoni Barcelos (7-0). The winner of this bout will be guaranteed a RFA featherweight title shot in their next bout.

Dickman has endeared himself to the RFA faithful by engaging in three of the most entertaining bouts in the promotion’s history. The 2007 NAIA national champion wrestler was destined for greatness in MMA. While wrestling at Lindenwood University, Dickman was teammates with UFC lightweight and TUF 15 alum Mike Rio, UFC flyweight Josh Sampo, and UFC vet Jonathan Brookins who won TUF 12. However, his adept transition into striking and jiu-jitsu under the tutelage of “One Kick” Nick Blomgren and Sergio Penha in Las Vegas could make him the most promising prospect to come out of the LU Lions wrestling program.

Dickman is now eager to show a new, improved, and more mature version of himself after dropping down to his natural weight class at 145-pounds. The lone loss on his record, which occurred at RFA 3 in June 2012, has served as the main motivation behind the three devastating KO and TKO wins that he has strung together since that night. Mainly, because he sees the lone person to defeat him on a daily basis. Jordan Rinaldi, who defeated Dickman to earn a title shot at RFA 3, has lived and trained with Dickman for the past 14 months in Las Vegas.

“When the RFA started, I knew this promotion was going to get huge. It’s been run by great people since Day 1, but at that time I wasn’t quite ready,” Dickman explained. “I hadn’t lost a fight. I went 12-0 as an amateur and 5-0 as a pro and got a little too cocky. The loss at RFA 3 did nothing but bless my career. It’s given me a new focus and I get reminded of that every day, since I live and train with Jordan (Rinaldi). He won the fight and got the title shot that night, but I have worked my way back to the semi-finals. You don’t get a lot of second chances and I’m going to make it to the finals this time. Barcelos is very good, but I will be too precise and tricky for him.”

The man meeting Dickman in the “semi-finals” this time around will be the grappling wunderkind known as Raoni Barcelos. After establishing himself as a can’t miss prospect on the Brazilian MMA scene, which saw the jiu-jitsu black belt and Brazilian national wrestling team member win the Shooto – Brazil featherweight title, Barcelos burst onto the international scene at RFA 11 in November. Barcelos controlled his fight with UFC veteran Tyler Toner from bell to bell in front of Toner’s home crowd and the high-altitude of the Rocky Mountains did little to slow down the son of 7th degree Coral Belt (Red-and-Black Belt) Laerte Barcelos.

Now the younger Barcelos, who is the top training partner of UFC champions Jose Aldo and Renan Barão, will look to secure a title shot of his own with a win over the highly-touted Dickman. Barcelos will have to ascend over 800 feet higher in the Rockies this time around, but is only focused on Dickman and securing his first world title shot.

“I’m very excited and honored to be fighting in a #1 contender bout for the RFA,” stated Barcelos. “I have a lot respect for Mark Dickman. He is a very tough and well-rounded opponent. I look forward to fighting him at RFA 14 and earning my first world title shot.”

The main card of RFA 14 will also feature a pair of promising flyweight prospects that will compete in a #1 contender bout. Tyler Voth (5-1) of Team Alpha Male and Jeimeson Saudino (8-2) of Laselva MMA will meet to decide who is next in line to challenge the winner of RFA 14’s main event.

Also on the main card of RFA 14 will be a pair of talented Women’s MMA fighters. The bout will pair The MMA Lab’s Jocelyn Lybarger (2-1) against Wyoming’s own Rosa Acevedo (1-0) at a 120-pound catchweight.

The entire main card of RFA 14 – Manzanares vs. Higo will be televised live on AXS TV starting at 10:00 p.m. ET / 7:00 p.m. PT on Friday, April 11th. RFA 14 will be the promotion’s first event in the state of Wyoming and the first major MMA event to come to the state since UFC 6 – Clash of the Titans, which took place on July 14th, 1995. More fights on the RFA 14 main card and preliminary card will be announced soon.