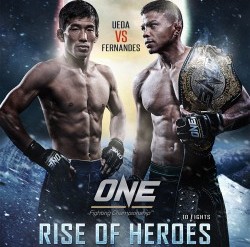 ONE Fighting Championship™ (ONE FC), Asia’s largest mixed martial arts organization with a 90% market share, returns to the Philippines for another blockbuster event on 2 May 2014 at the world-renowned SM Mall of Asia Arena.  The main event will feature reigning ONE FC Bantamweight World Champion Bibiano Fernandes defending his title against Japanese sensation Masakatsu Ueda. Two of the top Featherweights in Asia, Rob Lisita and Yusuke Kawanago, will also meet in what is expected to be a slugfest, while rising Malaysian star Gianni Subba battles local favorite Eugene Toquero in Flyweight action.

Tickets for ONE FC: RISE OF HEROES are on sale now at SM Tickets (www.smtickets.com). Ticket categories begin with the full Red Carpet and cageside experience for VIPs at PHP 6,360 followed by Patron at PHP 3,180, Lower Box at PHP 1,280, Upper Box at PHP 640 and General Admission at PHP 220. Pre-sale packages are available from 11 March till 23 March.

CEO of ONE Fighting Championship™ Victor Cui stated, “Expect ONE FC: RISE OF HEROES to be a night of explosive knockouts and exciting finishes as we return to the Philippines with probably the most exciting fight card ever! The 10 bouts that are planned for the night will feature the biggest stars from the Philippines and around the world. These bouts set the tone for a blockbuster card that will keep fans from around the world on the edge of their seats.”

Bibiano Fernandes is arguably the most decorated mixed martial artist in the world today. At ONE FC:  TOTAL DOMINATION, he unified the ONE FC Bantamweight World Championship by defeating Soo Chul Kim in impressive fashion. A Brazilian Jiu-Jitsu black belt with multiple world Jiu-Jitsu tournament wins, Fernandes will have the toughest test of his historic career when he takes on Japanese sensation Masakatsu Ueda.

Masakatsu Ueda is the former Shooto Featherweight Champion, a belt he defended successfully three times. He has an outstanding 18-2-2 record which marks him out as being one of the best Bantamweights in the world. He was also a very successful collegiate wrestler who won numerous national wrestling competitions in Japan as well as the All Japan Shooto Grappling Championship. With both fighters entering the famed ONE FC cage to compete for the right to be considered the best at their weight class, this will undoubtedly be an explosive affair.

Rob Lisita is the best Featherweight to emerge from Australia. He has fought in numerous smaller organizations and after chalking up an impressive record of six wins and only 1 loss, he will now face a step up in competition as he steps into the cage of Asia’s largest mixed martial arts organization for the first time. On 2 May, Lisita will have a chance at revenge when he takes on the only person to ever defeat him in mixed martial arts action – Yusuke Kawanago.

Yusuke Kawanago is the former Legend FC Bantamweight champion and boasts an impressive 13-3 record in professional mixed martial arts. He has beaten some of the best Featherweights in Asia, and owns a unanimous decision victory over Rob Lisita in 2012. Kawanago is vaunted for his technical grappling skills and will look to showcase that in his ONE FC debut.

Gianni Subba is one of the most talented prospects in the world. He made a resounding debut with an empathic knockout win over Singapore’s Bruce Loh, silencing the Singaporean crowd. He then dominated both his bouts in Malaysia, bringing his current professional mixed martial arts record to 3-0. He will now compete in the Philippines for the first time in his career. A former high school wrestler in the United States, Subba combines his technical wrestling skills with dynamic striking that he will look to use against Toquero.

Eugene Toquero is a Filipino fan favorite who has impressed since making his debut in 2012. A keen martial artist, Toquero was a member of the Muay Thai national team before his transition to mixed martial arts. He has a penchant for finishing his opponent and has won all of his bouts by TKO. Fighting in his home country in front of 20,000 screaming fans at the Mall of Asia Arena will give Toquero added motivation to defeat Subba in their Flyweight contest.