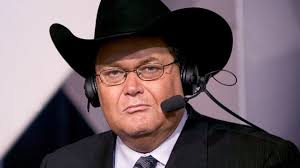 WWE Hall of Famer Jim Ross is back with a new blog on jrsbarbq.com. Thanks to Lordsofpain.net for the heads up. Ross talks about Batista’s negative reception, Bryan’s booking for Wrestlemania, and WWE’s creative team misfiring.

Getting way too much negative feedback here about how Batista is positioned as if it is Dave’s fault. It’s really no one’s ‘fault’ as sometimes talents are simply miscast. I’ve see it happen since the day I walked into the biz in 1974. The great thing about TV Wrestling creative is that the most powerful weapon in the business can be called upon…..the eraser.

I have always thought that Batista, because of the Daniel Bryan phenomenon, was a better fit to be a villian but that’s easy to say now. I expect that to occur later this week on Smackdown.

Daniel Bryan wants HHH at WM30 but will that keep or make Bryan’s fans happy? Likely not. WWE has a golden opportunity to provide Bryan and his fans a ‘magical moment’ in the Mercedes Benz Super Dome come WM30. Time will tell if that happens. It seems too obvious that it should happen for it to not occur.