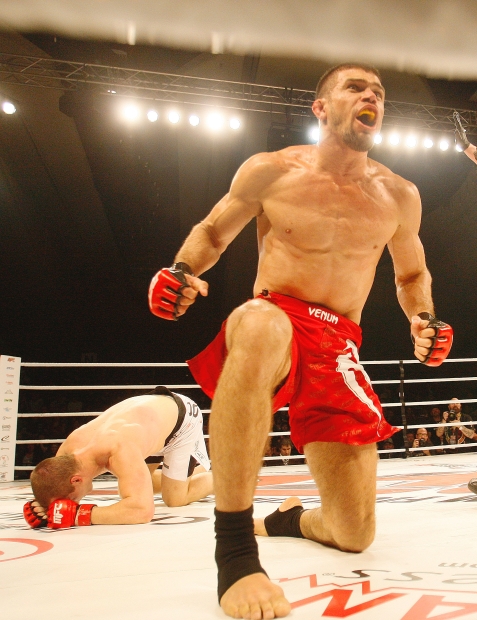 With the MFC lightweight crown on the line in the rematch between Kurt Southern and Tom Gallicchio, these two top-contender bouts will go long way in determining the next challenger for the new champion. The lightweight championship encounter is one of three title fights slated for MFC 40 which takes place on Friday, May 9 live on AXS TV Fights emanating from the Shaw Conference Centre in Edmonton, Alberta.

In one of the lightweight tilts, world champion jiu-jitsu ace Jonatas “Peixe Frito” Novaes (11-5) aims to get back in the title picture against rising star and fellow jiu-jitsu practitioner Andrew “Andrewconda” McInnes (4-1). The other bout in the 155-pound division will see a pair of highly explosive strikers do battle as Marcus “Bad Intentions” Edwards (6-2) meets MFC record-holder Aaron “Gorilla” Gallant (6-5).

“These two fights are tremendous. All four of them have a burning desire to get a shot at the title and I expect them to leave it all on the line,” said Mark Pavelich, the Owner/President of the Maximum Fighting Championship.

“There is no point to holding back anything when there’s a title opportunity at stake. These fighters know that, and I sense they’ll dig deep within themselves to find an extra gear. That can only mean great things for the fans in the seats and those watching live on AXS TV Fights.”

Originally from Conceicao de Barra, Brazil, Novaes (Twitter: @jonatasnovaes) has an incredible resume in jiu-jitsu and has parlayed those submission skills into mixed martial arts with eight of his 11 wins coming via tapout. Novaes has won six of his last eight fights including the lone knockout win of his career coming against former MFC contender Drew Fickett. Under the Maximum Fighting Championship banner, Novaes, who now lives in Chicago, Illinois, scored a third-round submission win over Southern at MFC 36, but then suffered a first-round TKO against in the rematch against Southern at MFC 38.

With hometown crowd support fighting in Edmonton, McInnes (Twitter: @andrewconda) made his hotly anticipated organizational debut at MFC 39 and earned Submission of the Night honors with a standing rear-naked choke finish in the second round against Dan Ring. All four of McInnes’s wins have come via submission and three of those have ended inside the opening round.

Edwards (Twitter: @BadIntentions91) also made his organizational debut at MFC 39 and dominated Sean Powers with striking and ground-and-pound en route to a rear-naked choke submission at 4:50 of the first round. The Littleton, Colorado, product has won six of his last seven with five finishes coming inside the first round.

Gallant’s foray into MFC 40 (Twitter: @gallantgorilla) marks the return of the MFC record-holder for fastest knockout – an accomplishment the Calgary, Alberta, product set at MFC 38. Gallant executed a devastating three-punch combination that floored Matt Jelly a mere seven seconds into their bout back in October. The electrifying finish earned Gallant his fourth straight win.

O’Connell vs. Valimaki back on schedule

The other bout announced for MFC 40 is the previously scheduled matchup pitting Sean “The Real OC” O’Connell (15-4) against Victor “The Matrix” Valimaki (17-8). The light-heavyweight contest was pulled from MFC 39 when Valimaki came up ill, though O’Connell stayed on the card and earned a quick submission victory over late replacement Markhaile Wedderburn.

Valimaki, who will have the home-town advantage of fighting in Edmonton, became one of the original MFC stars when he upset legendary veteran Dan “The Beast” Severn at MFC 8 in September 2005. After claiming the MFC title with a win over Jason Day one year later, Valimaki (Twitter: @V2MMA) defended the belt in February 2007 with a startling, come-from-behind knockout win over Jared Kilkenny at MFC 11. But in August 2007 at MFC 13, Valimaki had the title snatched away from him in a TKO loss to Roger Hollett.

Fighting out of Walnut Creek, California, O’Connell (Twitter: @realOCsports) has won eight of his last nine bouts and notched seven victories via knockout.

A final main-card matchup along with a roster of preliminary fights will be announced shortly.