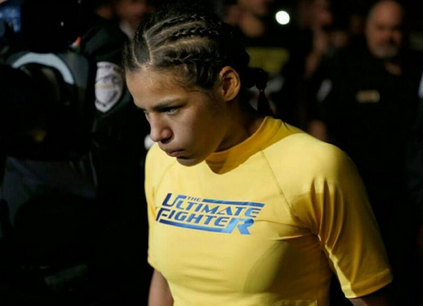 It was first reported on Wednesday that TUF 18 winner Julianna Pena would have to withdraw from her UFC 171 bout against Jessica Andrade due to a knee injury suffered in training.

What happened to @VenezuelanVixen at “her gym” is the most disgusting thing I have ever heard. Ranked #10 out for 2 years. #leavethatgymnow

At today’s UFC 169 pre-fight media scrum White explained why he advised Pena to “leave that gym now” as he recounted the story as it was told to him immediately after the incident by the “Venezuelan Vixen” herself:

“It’s the worst knee injury I’ve ever heard of, ever, in the sport. You hear about those types of injuries in football. Apparently, when she came into the gym — and again, she was hysterical when I talked to her, crying. She just won The Ultimate Fighter. She’s ranked No. 10 in the world. And she was training in her gym and one of her training partners, a guy, was saying to her, ‘Oh you’re wearing your Ultimate Fighter shirt, we’re real scared.’ ….was basically talking smack to her, jumped on her back, started cranking her neck, and the way that she fell, her knee blew out. The most disgusting thing I’ve ever heard in my life. A year-and-a-half to two years she’ll be out. I told her leave that disgusting gym and go somewhere else — with new coaches, new training partners, whatever. And that’s all I know.”

Asked if he knew who was responsible for the incident, White said:

“I don’t know who it was. It was a guy though, basically attacked her and blew her knee out.”

MMAFighting.com’s Ariel Helwani spoke with Pena’s coach who told him a different story:

Apparently she trains 3 times a day. Can’t get enough. Jumped into a midday training session a little too eager and the injury happened.

@danawhite that gym handed u 2 ultimate fighters raised from teenagers created from scratch, there is a reason she destroyed evry1 in UFC

White said the truth probably lies somewhere in the middle:

“That’s so far from the story she [Pena] told me right after she was completely hysterical and crying, completely opposite. Completely different story from what she told me. Somewhere in the middle lies the truth.”

It’s hard to imagine someone, a guy, actually “attacking” a female fighter at her own gym. Either way, the bad news is the No. 10 ranked UFC women’s bantamweight fighter is going to be out of action for possibly up to 2 years — longer than Anderson Silva even, who actually broke his leg in half. That just sucks.