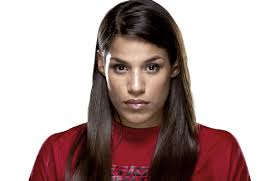 UFC officials have announced a new female MMA bout for UFC 171. TUF winner Julianna Pena has been forced to withdraw from her bout with Jessica Andrade at UFC 171. Raquel Pennington has agreed to step in and fight Andrade in place of Pena.

Pennington (4-3) made her official UFC debut with a unanimous decision win over MMA veteran Roxanne Modafferi at the TUF 18 Finale. Pennington made it to the semi-finals of the reality show before losing to Jessica Rakoczy.

Andrade (10-3) is coming off a unanimous decision win over Rosi Sexton in her last outing at UFC Fight Night 30 last October. Andrade lost her promotional debut against Liz Carmouche and now stands at (1-1) inside the UFC.

The UFC 171 event will be headlined by the UFC welterweight title fight between Johny Hendricks and Robbie Lawler and will take place at the American Airlines Arena in Dallas, Texas.

Stay tuned to ProMMAnow.com for more UFC 171 news and coverage.