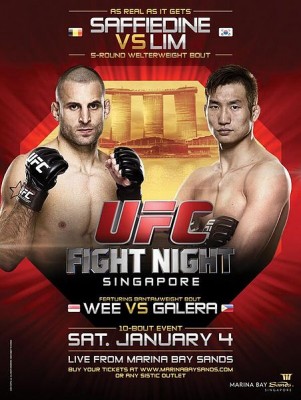 While we are all still trying to digest the UFC 168 card that took place on Saturday night, there’s another UFC event on the horizon on this Saturday, January 4. The UFC Fight Night: Saffiedine vs. Lim event will take place at the Marina Bay Sands venue in Marina Bay, Singapore.

The event will not air in North American TV markets, and will only be available via the new UFC Digital Network(UFC Fight Pass). The card will feature a lot of fighters not familiar to casual MMA fans, but will also mark the UFC debuts of a few MMA veterans that hardcore fans know all too well. Japanese standout fighters Tatsuya Kawajiri (32-7-2), and Katsunori Kikuno (21-5-2) will make their UFC debut on this event. The event will begin with preliminary fights at 7 a.m. ET, with the main card fights beginning at 9 a.m.  ET.

The full UFC Fight Night: Saffiedine vs. Lim full card is below:

The video below will provide more insight to the UFC Fight Pass service: