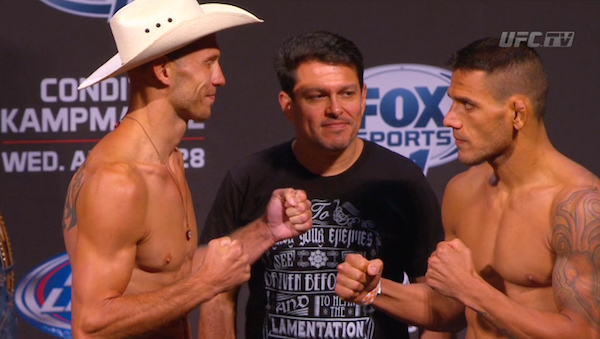 Donald Cerrone is staying busy following an up and down 2013. The lightweight had four fights this year starting with a January loss to Anthony Pettis. He would rebound to win against KJ Noons and then fall to Rafael dos Anjos in Indianapolis. He came back strong with a submission of the night at UFC 167 over Evan Dunham. His first task has been penciled in for 2014 as he heads to Chicago to meet Adriano Martins.

Martins has put together an impressive six fight winning streak that includes his own submission of the night bonus for his kimura over Darren Cruickshank in Brazil. He went 23-6 as he made his away fighting around Brazil before his Strikeforce debut when he defeated Jorge Gurgel by decision in January.

The two will meet at the United Center in Chicago on January 25th at UFC on FOX 10. The event is headlined by a lightweight battle between Josh Thomson and former champion Benson Henderson. Here is how the night is shaping up so far.