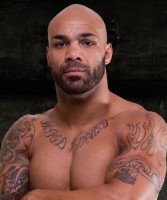 Could it be that Mike Kyle and Anthony Johnson are not meant to fight each other? The pair were scheduled to headline WSOF 5 earlier this year but Johnson suffered an injury and was replaced by Andre Arlovski. Now Kyle has broken a toe and the bout has been postponed.

“I’m as disappointed as anyone that we’re forced to cancel this fight, but Mike just could not compete with his broken toe, and we simply could not find a suitable opponent for Anthony on such short notice,” World Series of Fighting President Ray Sefo said. “That said, we are fortunate that we still have a fantastic championship matchup between Georgi Karakhanyan and Lance Palmer that will now serve as our main event, and I think fans are still going to enjoy an incredible fight card.”

World Series of Fighting 7 will now be headlined with the inaugural featherweight title on the line in a fight between Georgi Karakhanyan and Lance Palmer. Karakhanyan has amassed 22 wins in his professional career and is riding an eight fight win streak into the bout. Palmer brings his All American wrestling pedigree with him as well as a perfect 7-0 record.

The co-main event is also a fight that was supposed to go down in Atlantic City at WSOF 5. Jesse Taylor will square off against Elvis Mutapcic in a middleweight scrap. Mutapcic was ruled out of the fight in Atlantic City when the New Jersey Athletic Commission saw him take an unidentified substance. A lightweight battle between Nick Newell and Sabah Fadai will also be one to watch for on the main card.