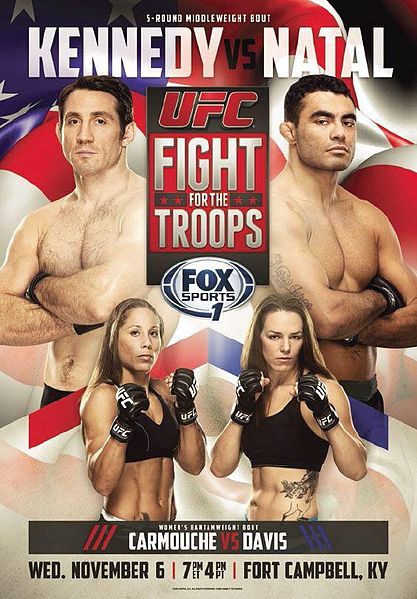 The Ultimate Fighting Championship presents UFC FIGHT NIGHT 31 tonight from Fort Campbell, Ky. This Fight for the Troops card is headlined with a middleweight bout between Tim Kenndy and Rafael Natal. The main card of UFC Fight Night 31 will air LIVE on Fox Sports 1 starting at 7 p.m. ET.

ProMMAnow.com will provide LIVE results and play-by-play commentary of all the action.

ROUND 1 – Touch gloves. Kennedy catches a kick, lands a counter right. Natal with a counter right, spin kick. Leg kick Natal. Two high kicks from Kennedy are blocked. Left hand from Natal. Kennedy looks sort of nervous/tense. Right from Natal. Natal looks more relaxed, and he scores a quick takedown but Kennedy is quickly back up. Powerful leg kick from Natal drops Kennedy. Back up. Natal switching stances. Powerful body kick from Kennedy. Kennedy with a couple leg kicks. Quick left hook from Kennedy drops Natal to the canvas and he follows up with a big right hand and this fight is over. Chants of “USA” ring out in the hangar at Fort Campbell, Ky.

ROUND 3 – Markes shoots, stuffed. Accidental eye poke from Romero. Brief time out. Nice left from Romero, again, Markes staggered. Another left. Leg kick from Markes. Huge left drops Markes, Romero follows up with a right hammerfist and a left and Markes is out.

ROUND 3 – Left from Khabilov. Leg kick Masvidal, again. Right hand. Khabilov on the outside circling and he lands an incredible wheel kick to the head that drops Masvidal, but somehow does not knock him unconscious. Khabilov attacks but Masvidal defends, scramble, back to the feet. Masvidal briefly gets a takedown before it’s right back up. Masvidal shoots, presses Khabilov to the cage, knee to body. Khabilov briefly trips to the ground, back up, they square up. Right left left from Khabilov, he catches a spin kick and takes Masvidal down. Masvidal rolls out of a body lock, back to the feet. Khabilov shoots, stuffed. Masvidal shoots, stuffed, Khabilov landing body shots. Back up, time. PMN sees it 10-9 for Khabilov and 29-28 Khabilov.

ROUND 1 – Touch gloves. Chiesa flashing a right jab. Leg kick from Smith. Counter right from Chiesa, he then checks a leg kick. Smith goes high with a kick. Left hand, body kick from Chiesa. Smith gets a body lock and looking for the trip. Gets a body lock from the back and slams Chiesa. Chiesa sweeps, takes Smith’s back with a body triangle locked up and looking for a choke. Smith defending well so far. Chiesa looking for a neck crank. Tight body triangle from Chiesa but Smith gets free and takes Chiesa’s back, now standing. Body lock takedown from Smith, has Chiesa’s back and looking for the choke, now standing. Chiesa dives to the ground in attempt to spike Smith but he’s still on Chiesa’s back. Smith lets go and they square up. Time up, touch gloves. PMN sees it 10-9 Smith.

ROUND 2 – Touch gloves. Smith shoots in, clinch, knees, pushes Chiesa to the cage, knees to thighs and body. Chiesa goes for a body lock takedown, Smith defends. Leg kick Smith. Left straight from Chiesa. Again. Smith ties him up against the cage. Chiesa with a judo throw takedown, Smith goes head first to the canvas, Chiesa takes Smith’s back and chokes him out quickly.