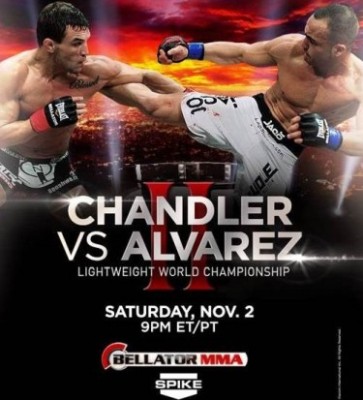 Round 5 – Alvarez comes out swinging. Flying knee attempt from Chandler, leg kick. Alvarez’s corner tells him he needs a finish to win. Nice uppercut from Chandler, followed by a nice takedown, takes Alvarez’s back, both hooks in and looking for the choke, neck crank. Alvarez scrambles to his feet. Has a body lock from the back. Chandler tries to roll out, back to his feet now and they unleash punch combos, Alvarez gets the better of it. Chandler shoots, stuffed. Again. Knee to the body from Alvarez as he presses Chandler to the cage. 2 minutes to go. Alvarez takes Chandler’s back with both hooks in and looking for the choke. Chandler rolls over. Again Alvarez goes for his back and choke, Chandler rolls out again. Alvarez takes his back one more time with 1 minute to go. Chandler very bloody. Chandler ends up on top inside guard. Alvarez up. Chandler holding on and gets the takedown, holds him there until the bell. Amazing fight. PMN sees the round 10-9 Alvarez but the fight 48-47 for Chandler. Chandler’s left eye is completely swollen shut.

Round 1 – Touch gloves. Right from Curran. Big leg kick inside from Straus, he shoots, gets Curran on his back against the cage. Straus on top in half guard. Curran gets to his feet, gets some distance. They square up. Nice one two from Straus, connects. Inside leg kick Curran. Body kick from Straus, left hand. Curran fires back with punches. Inside leg kick from Straus. Curran delivers an accidental kick to the groin. Time out called. Step in knee from Curran. Body kick from Straus. He drives Curran to the cage. Knee, elbow from Curran. Straus pressing on him, backs out with a left hook. Left hook, high kick from Straus, steps in with a one two punch, gets the takedown. Downward elbow from Curran while Straus struggles to keep him down. Curran to his feet. Straus with a body lock from behind. Now clinched against the cage, Straus pressing on him, they trade knees. Elbow, left from Curran on the break. They trade a few punches and kicks before the bell. PMN sees it 10-9 Straus for round one.

Round 3 – Double right jab, left from Straus. Step in knee from Curran, and a leg kick that buckles Straus. Flying knee from Straus misses. Double right jab from Straus. Leg kick from Curran. Body shot from Straus, then a jab. Shoots in for a single, Curran defends. Straus with a body lock against the cage, Curran softens him up with punches. Judo throw from Straus but the cage prevents Curran from going completely down. Straus gives him another throw, as they scramble Curran gives him an illegal knee to the face that hurts Straus. Curran realizes immediately he messed up. Straus  gets back to his feet after shaking it off and calls in the doctor to check him out. Doc is going to let it go. Ref takes a point from Curran. Here we go… 90 seconds left. Straus gets a trip takedown, moves to side mount. Straus drops a few tight elbows. Curran tries to explode out, gets to full guard. 30 seconds left. Straus with a little ground and pound before the bell. Curran throws up his legs for a triangle and Straus passes to half guard. PMN sees it 10-8 for Straus (due to point deduction).

Round 4 – Curran fires off punches first. Nice right, body kick from Straus. He goes for a judo throw, Curran defends. Straus presses Curran to the cage, scoops his legs out for a takedown. Curran back to his feet but Straus stays sticky with a body lock from the back, big slam from Straus (belly-to-back). Curran gets to his knees. Straus hanging on him from the back, knees to his thighs. Straus gets Curran back to the mat. Curran looking for a guillotine with full guard. 90 seconds to go. Straus gives a couple body shots and pops his head out. Straus on top in half guard, working the ground and pound. Curran cut on his forehead. PMN sees it 10-9 Straus.

Round 5 – Touch gloves. Left hand, body kick from Straus. Leg kick inside. Nice one two from Straus, push kick. Right hook from Curran. Body kick Straus. Nice right follows. Body shot Curran. Jumping knee from Straus. Right from Curran. Straus hurts Curran with a left, follows up with a flurry and a knee. Straus is clearly a much improved fighter here. Body lock, Straus puts Curran to the cage, pressing. Body shot, uppercut from Straus. Curran turns him around with 2 minutes to go. Curran drops levels looking for the takedown. Straus defends, looks for the judo throw. Curran defends. Curran looks for the trip, no dice. Knee from Straus. Curran drops levels. Straus defends. Curran goes for a single, sweeps the back leg. Straus reverses position, ends up on top inside full guard and landing ground and pound. PMN sees the round 10-9 Straus and sees the fight also for Straus. You could arguably give round 2 to Curran. Straus had the rest has I see it.

Round 1 – No touching gloves here. This is the fight I was most looking forward to. Don’t sleep on Newton. Newton switching stances. Mo shoots, Newton defends but ends up on the ground with Mo riding him. Couple left hands from Mo. Newton on his feet as Mo hands on with a body lock. They spin around as Mo stays sticky with the double leg. Newton fighting to try and get to his feet. Mo trying his best to keep Newton down. Right hands from Mo against the cage. Newton gets the separation. Lands a low kick to the groin. Time called briefly. Right from Newton, leg kick. Newton goes for a spinning kick and Mo uses this chance to put him on his back. Mo inside full guard, trying to work ground and pound. Newton gets his back to the cage. Short lefts from Mo. Newton gets up and throws a punch/kick combo that’s blocked. Left from Newton. Mo blocks a right. Mo with a jab. Not letting his hands go much. Mo with a little showmanship before the bell. PMN sees it 10-9 Mo.

Round 2 – Big Country in Mo’s corner. Body kick Newton, again. Switches stances. Another body kick. Nice left hand from Mo. Body kick from Newton after missing a spinning back kick. Overhand right from Newton lands on the shoulder. Mo shoots for the single, stuffed. Knee to body from Mo. Pressing to the cage. He drops down for a single, picks Newton up for a slam and ends up inside full guard. Mo in side mount. Newton gets to his feet. Newton with a one two, head kick and it rocks MO. Mo gets to his feet and Newton is all over him. Right hand, body kick from Newton. Mo shoots, stuffed. Right from Newton. Clinch, break. Mo, jab. Mo still in front of him. Jab from Mo. Mo looks at the clock after avoiding some shots. Mo still dropping his hands some, looking sloppy. Newton is very unorthodox. Left, then big right from Newton. Side kick. Newton’s combos causing some problems. PMN sees it 10-9 Newton.

Round 5 – Newton’s corner told him it’s tied up. Body kick Newton, side kick. Left hook from Mo. Left right Newton. Nice left jab from Mo but he doesn’t follow up. Overhand right from Newton. Big counter right from Mo. Trade jabs. Mo ducks a spin kick, shoots for the takedown. Newton stuffs it. Great takedown defense. Inside leg kick from Newton. Right from Mo. Side kick Newton. Mo pressing. One minute left. Right from Newton. Side kick. Mo shoots, stuffed. He stays on it and gets Newton to the ground. Can’t do anything with it as Newton gets back up. Newton shoots, sprawl from Mo. They hug. PMN sees it 10-9 for Mo but the fight 48-47 for Newton.

Round 1 – Bronzoulis with a couple leg kicks. High kick, leg kick. Body kick from Riggs. Leg kick. Bronzoulis with leg kicks inside and outside. Another outside leg kick. Big leg kick from Bronzoulis. Push kick. One two from Riggs. One two three from Riggs. Leg kick buckles Riggs. Another big leg kick from Bronzoulis. Push kick. Leg kick Bronzoulis, high kick, left hand. Big right from Riggs catches Bronzoulis behind the head and he touches the ground. Riggs tries to follow up. Bronzoulis back up and gets back to work. Riggs catches a kick, gets a body lock takedown. Inside full guard. Riggs looking for the ground and pound, takes Bronzoulis’ back with one hook, now two hooks in. One minute to go. Bronzoulis escapes and scrambles to his knees. Riggs gives a couple knees to the shoulders and some hammerfists to the side of the head. PMN sees it 10-9 for Riggs.

Round 3 – Leg kick Bronzoulis. Leg kick Riggs. Bronzoulis fires back with a punch combo. Riggs backs him to the cage with punches, gets a big slam takedown. Now on top side mount. Bronzoulis gives up his back. Riggs gets one hook in, now both hooks. They roll over as Riggs looks for the choke. Bronzoulis gets to his knees; now on one knee, trying to fight off the choke attempt from Riggs. 90 seconds left as Riggs continues to try and soften Bronzoulis up. Brounzoulis stands up with Riggs on his back, both hooks in. Riggs drags him back down but Bronzoulis spins around to top control in half guard. Riggs gets to his feet before the bell and fires off a punch or two to ward off the attack. PMN scores this Fight Master final 10-9 for Riggs for the round and 30-27 for Riggs for the fight.