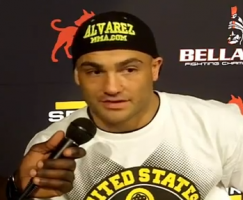 It was a great night of fights inside the Bellator MMA cage Saturday night as three new champions were crowned in Long Beach.

Daniel Straus was able to battle back after an illegal knee shook him up to capture the featherweight title and avenge an earlier loss to Pat Curran.

Emmanuel Newton proved to be too much for Muhammed “King Mo” Lawal for a second time as Newton was crowned the interim light heavyweight champion. Newton out pointed Lawal for the decision win.

The Bellator 106 main event was pure fireworks once again as Eddie Alvarez bested Michael Chandler in another epic battle for the lighweight title.

Miss the action. Get caught up by checking out the highlights here.