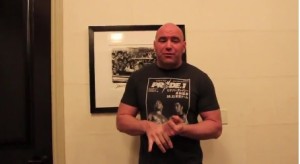 Dana White gives us a behind the scene’s look at the happenings of UFC 165 in his recent video blog.  We get access to Jon Jones pre-fight as he talks to his team. You’ll also get a glimpse at Brendan Schaub celebrating after his win over Matt Mitrione. Eddie Wineland angered after what he felt was a premature stoppage in a fight for the interim bantamweight title.  Dana White talks to Alexander Gustafsson as if he had won and commends him on what Dana says is fight of the night, fight of the year and fight of I don’t know what.