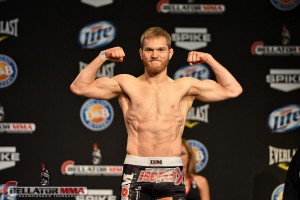 Newport Beach, CA.  – The weigh-in and pre-fight press conference for Bellator MMA will take place Thursday at 5:00 p.m. CST at Exhibit Hall A & C inside US Cellular Center (370 1st Ave E, Cedar Rapids, IA 52401). Bellator MMA will take place from the US Cellular Center on Friday, October 18th with the first fight taking place at 6:00 p.m. CST and streaming LIVE on Spike.com. The televised portion of the night will begin at 8:00 p.m. CST and will air LIVE on Spike TV.

All participants from Friday night’s event will be on hand, as well as Bellator CEO & Chairman Bjorn Rebney.

As always the weigh-in is open to both the public and media.

mun2 is the leading Hispanic cable network for young millennial adults 18-34.  From reality to music, on-air to digital, mun2 creates original content that resonates across a multi-screen platform.  Young, vibrant and unabashedly Latino, mun2 has a distribution to over 38 million households. The network is part of Telemundo Media, a division of NBCUniversal