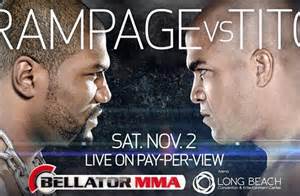 The Bellator 106 event looks to be capped off as two additional bouts have been added . The November 2nd event appears to be set with 14 fights with light heavyweights Quinton Jackson and Tito Ortiz headlining.

The Spike TV prelims will get Season 8 featherweight finalist Mike Richman (15-3).  Richman was last in action this April at Bellator 95 where he dropped a decision in the tournament final to Frodo Khasbulaev. He is 2-1 in his last three outings.  Richman is a former Marine and was also briefly on Season 12 of The Ultimate Fighter, losing his elimination fight to get into the house.

Richman’s opponent is Akop Stepanyan. Stepanyan is Russian-Armenian and is coming off a loss to Justin Wilcox at Bellator 99.

The fourth fight added to the Spike TV portion of the event will be Karo Parisyan vs. Cristiano “Soldier Boy” Souza. Parisyan is a former UFC and WEC contender. He made his Bellator debut but was knocked out by Rick Hawn at Bellator 95.  Souza is undefeated in his first six professional fights including two wins in Bellator. The American Top Team product has five finishes under his belt, three by knockout and two by submission.