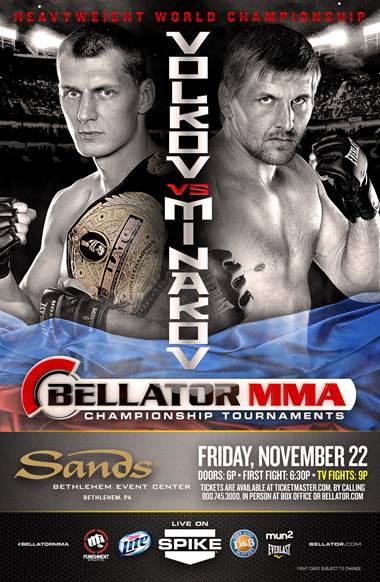 The event will air live starting at 9 p.m. ET on Spike TV and in Spanish language on mun2. The preliminary card will be streamed exclusively on Spike.com starting at 6:30 ET. Tickets for the event are on sale now and can be purchased by visiting Ticketmaster.com or the Sands Casino Event Center Box Office.

With a combined record of 31-3 with 21 knockout finishes between the two, the odds of November 22nd’s title fight going the distance seems remote. Minakov stormed onto the American scene completing his run through the Toughest Tournament in Sports, keeping his finishing streak alive at nine.

More information on the fight card will be made available in the coming weeks.

Spike TV is available in 98.7 million homes and is a division of Viacom Media Networks.  A unit of Viacom (NASDAQ: VIA, VIAB), Viacom Media Networks is one of the world’s leading creators of programming and content across all media platforms.  Spike TV’s Internet address is www.spike.com and for up-to-the-minute and archival press information and photographs, visit Spike TV’s press site at http://www.spike.com/press.  Follow us on Twitter@spiketvpr for the latest in breaking news updates, behind-the-scenes information and photos.