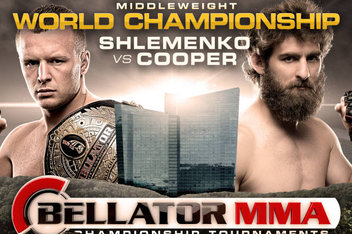 Bellator MMA was set to kick off their ninth season with a respectable card. However, medical issues have forced Joe Riggs and Joe Warren off the card, so a lot of the shine has dissipated. However, there is still a middleweight title fight and the first round of another Bellator tournament. The card takes place tomorrow night at the Mohegan Sun Arena in Uncasville, Conn. The main card will air live on Spike.

Middleweight Title Fight
Alexander Shlemenko vs. Brett Cooper
The good news for handicappers is that this fight should be relatively easy to predict. Shlemenko already defeated Cooper back at Bellator 44 in 2011. On top of that, Shlemenko has not lost to anyone not named Hector Lombard 2009.

Cooper is not a good enough striker to hang with Shlemenko in a standing exchange, so his path to victory must come via wrestling and the ground game. “Fudoshin” might be able to drag his opponent to the canvass, but Shlemenko stays in constant motion on his back. On top of that, it is always the smart move to favor the more dynamic fighter in a five-round contest. Shlemenko is the clear favorite here, but Cooper should be able to avoid being finished.

Middleweight Tournament Quarterfinal
Justin Torrey vs. Andreas Spang
Torrey will step back into the Bellator cage for the first time since 2010. He holds an undefeated 7-0 record. On the feet, Torrey is a decent striker, and he likes to throw a lot of leg kicks.

Spang fancies himself a striker. He went 1-0 in K-1 so you know Mike Goldberg is excited. However, real “K-1 level” strikers do not get knocked out by guys like Doug Marshall. However, he should be in line for a victory here.

As previously mentioned Torrey likes to throw a lot of leg kicks. Of course, his leg kick barrage often coincides with low hands and other defensive mistakes. Throwing leg kicks at a more polished striker often leads to highlight-reel knockouts. Plus, Torrey has not fought in over three years. If anyone ever bothers to run the numbers, they will likely show that fighters coming off extensive layoffs rarely win.

Middleweight Tournament Quarterfinal
Jeremy Kimball vs. Perry Filkins
This is the interesting kind of prospect battle that you only really get in Bellator. Kimball has clearly fought the better opposition. In fact, he is currently riding a four-fight winning streak over relatively known fighters. On the other hand, Filkins also has a solid record, and he also has a style that will suit him in this fight. “Filthy” likes to get takedowns and work for positions. However, the smart money would be on Kimball. Filkins might be able to get takedowns, but Kimball will be able to score more on the feet and do enough damage to win.

Middleweight Tournament Quarterfinal
Mikkel Parlo vs. Brian Rogers
Rogers’ fight with Dan Cramer was borderline incredible. In no way was it a good fight, but it was certainly impossible to believe. Rogers was clearly the better athlete. Cramer stuck to his game plan of getting takedowns and working on the floor. The only wrestling defense Rogers had was the lateral drop and he went for it over and over and over.

Parlo showed in his last fight, that he is still quite green. He likes to stand and strike, but if he gets into a firefight, he will lose. Look for Rogers to redeem himself since he is not fighting a guy who constantly wants to take him down and hold him.

Middleweight Tournament Quarterfinal
Jason Butcher vs. Giva Santana
The story of Santana is the same. “The Arm Collector” is an above average grappler with an affinity for armbars. However, he often struggles when facing off against solid veterans or skill grapplers. Butcher fits half of that mold.

At only 6-0 Butcher is certainly not a veteran, but he is a solid grappler. He holds positions well and finishes fights when given the chance. Plus, here he will probably have a wrestling advantage, which will be huge in this fight. Look for Butcher to spend most of this fight on top and force Santana to play defense. He might not be the biggest name here in the tournament, but with the right matches he could be a dark horse in this bracket.

Derek Anderson vs. Patricky Freire
Some wannabe MMA gambling sharps might want to lay some coin on Anderson. He is a 9-0 youngster coming out of the California scene. Freire has lost two in a row and three of his last four. However, Anderson will not have any answers on the feet. On top of that, eight of Anderson’s wins have come for a promotion that is run by his gym. It is safe to say he is not fighting guys on the level of “Pitbull”

2 thoughts on “ProMMANow guide to Bellator 98”