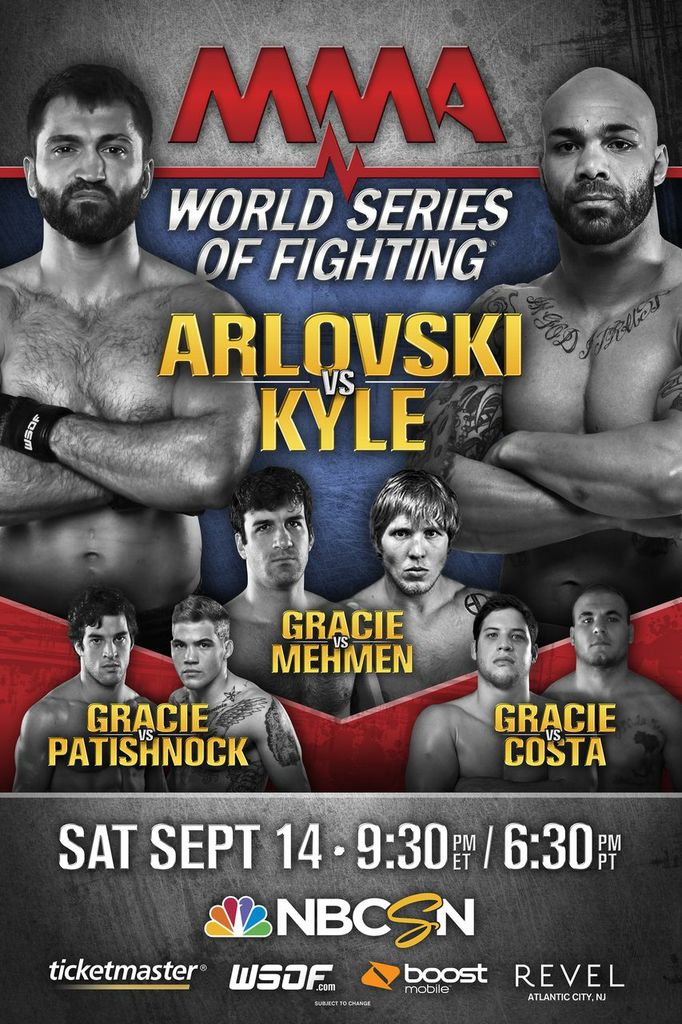 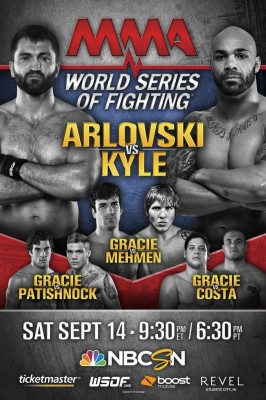 The First Family of Mixed Martial Arts will leave a significant imprint on World Series of Fighting’s next event as three different members of the Gracie clan will appear on the eagerly anticipated Sept. 14 card at Revel Casino Hotel in Atlantic City, NJ.

In addition to a recently announced heavyweight contest between Rolles Gracie (8-1) and Derrick “Caveman” Mehmen (15-5), Gregor Gracie (7-3) meets Rich Patishnock (5-1) in a welterweight bout, and Neiman Gracie (0-0) makes his professional MMA debut against Darren Costa (0-1) in a middleweight contest at “World Series of Fighting 5: Arlovski vs. Kyle.”

Gregor Gracie vs. Patishnock and Neiman Gracie vs. Costa are both scheduled for the evening’s preliminary card, which streams on World Series of Fighting’s official website, WSOF.combeginning at 6:30 p.m. ET/3:30 p.m. PT, and precedes the evening’s NBC Sports Network-televised main card.

Tickets for World Series of Fighting 5 are currently on sale at all Ticketmaster locations, Ticketmaster.com and charge-by-phone at (800) 745-3000. A heavyweight slugfest between sambo master Andrei “The Pit Bull” Arlovski (19-10) and slugger Mike “MAK” Kyle (20-9-1) serves as the evening’s main event.

Rolles Gracie is a third-degree black belt in Gracie Jiu-Jitsu, as well as judo. Born in Rio de Janeiro, Rolles currently resides in Holmdel, N.J., where he serves as a lead instructor at the famed Renzo Gracie Jiu-Jitsu Academy. Rolles has lost just once in nine career contests, and all eight of his wins have come by way of submission.

Mehmen, of Cedar Rapids, Iowa, who matches Rolles’ 6-foot-4 frame, trains with one of the world’s best squads at American Top Team. A seven-year veteran of the sport, Mehmen currently boasts a three-fight win streak and has earned 10 of his 15 career wins by way of knockout.

Gregor Gracie is a two-time world champion jiu-jitsu player who returns to the World Series of Fighting cage for a second time. The 26-year-old Brazilian suffered a disappointing TKO loss to upstart Tyson Steele at World Series of Fighting’s debut event last November and now looks for a return to the form that has seen him earn six of his seven career victories by submission.

Gregor now meets Patishnock, a resident of Whippany, N.J., and member of the Garden State’s famed AMA Fight Club. Patishnock made his World Series of Fighting debut in March and earned a TKO win over another member of the Gracie clan, Igor Gracie, when doctors called a halt to the bout at the end of the first round. Fighting professionally for two years, Patishnock has tasted defeat just once in six contests.

Another member of Renzo Gracie’s fight team, the 25-year-old Neiman Gracie has thus far in his career focused exclusively on grappling conquests but now transitions to MMA for the first time. He meets Maryland’s Darren Costa, who made his professional debut in May but suffered a second-round TKO loss.