Pedro Munhoz: ‘I’m ready to go to the UFC’ *VIDEO* 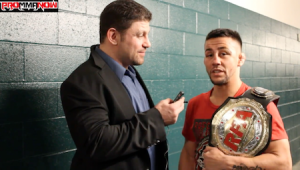 ProMMAnow.com (www.prommanow.com) reporter Dan “The Wolfman” Theodore caught up with undefeated bantamweight Pedro Munhoz (9-0) following his five-round split decision title win over veteran Jeff Curran (who retired after the fight) at RFA 9 this past weekend. Munhoz shared his thoughts on the fight, how he felt going a full five rounds for the first time in his pro career, and he also discussed many of the technical aspects of the fight.

Munhoz said he feels he is ready for the UFC and gave his opinion on the UFC’s current bantamweight champ Dominic Cruz, as well as interim champ Renan Barao. He is also confident, should he get a couple wins inside the Octagon under his belt, that he could defeat Barao.