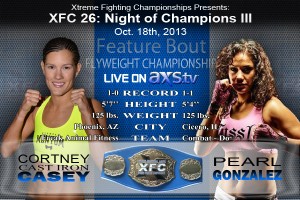 “Why put off the Inevitable?”  Those were the words of XFC President John Prisco; moments after Kenny Rice and Bas Rutten announced on Inside MMA, that the promotions Inaugural Flyweight Championship match between Cortney “Cast Iron” Casey and Pearl Gonzalez would take place in Nashville, TN on October 18th at the promotions yearly extravaganza, Night of Champions.  The 125 pound title fight will take place at the Nashville Municipal Auditorium and will broadcast LIVE on AXS TV – “Your home for MMA”.

Cortney “Cast Iron” Casey (1-0) burst onto the professional scene last month at XFC 24 in Tampa, Florida when she made short work of Kelly Warren; a veteran of seven professional fights and a woman that consensus #1 Flyweight Jessica Eye couldn’t finish within three rounds.  Before going pro Cortney held an ammy record of 6-2, along with 2 belts at 125 lbs: one for Tuff-N-Uff and the other for Coalition of Combat. Casey is a former professional soccer player for the Seattle Sounders and was also a D1 soccer player for the University of El Paso Texas. The poise and confidence Casey displayed in her debut, proved to the millions who witnessed her first professional fight, what her manager Mercedes White had been telling everyone for over a year; this girl was destine for greatness.  Her impressive win over Warren, and her history of highlight reel submissions, have now catapulted “Cast Iron” into her first professional title fight. Will the Cortney Casey era begin in Music City, or, will Pearl Gonzalez have the young phenom singing the blues?

Cut from the same cloth as Cortney Casey, Illinois native Pearl Gonzalez (1-1) wasted no time taking on high caliber opponents.  Gonzalez debuted in February of 2012 against Munah Holland, one of the industries top strikers and deadliest opponents.  Even though she lost a majority decision to Holland, it was this type of attitude, along with her tremendous skill, that attracted the XFC brass to sign Pearl to a multi-fight deal.  Prior to joining the XFC, Gonzalez earned two amateur MMA titles, a NAGA tournament,  and an Absolute jiu-jitsu belt before making the decision to turn pro.  At XFC 22: Crossing the Line, Gonzalez used her aggressive ground game to submit Suzie Montero at 4:56 of the first round and send notice to anyone looking to join the division, that all roads to a title would have to go through her.  Is there a Titanic victory in Pearl Gonzalez’s future, or will she fall victim to Cortney Casey’s own version of the Music City Miracle?

“These are two of the hottest new prospects in women’s mixed martial arts”, explained John Prisco.  “Both Cortney Casey and Pearl Gonzalez were brought in to our company because we knew each has what it takes to build a division around and represent the XFC to the fullest.  We could hold a tournament and drag this title chase out, but I honestly think Casey and Gonzalez would be the two left standing in the end, so why put off the inevitable?  I want the XFC fans to enjoy this match up now, and the other women in the division will now have a champion to gun for.  Don’t be surprised, though, if this is just the first of several meetings between these two competitors.  That’s how exciting a match up I think this is going to be.”

Xtreme Fighting Championships returns to Music City USA for XFC 26: Night of Champions III on October 18, 2013. The event is presented by ICRealTime Security Solutions and Throat Punch Industries Apparel. The event will be broadcast Live on AXS TV from the Municipal Auditorium in Nashville, Tennessee, beginning at 9pm Central. For more information on the event or to purchase tickets, visit www.officialxfc.com. For daily updates and news, follow this event, and the XFC, on Facebook and Twitter @OfficialXFC.