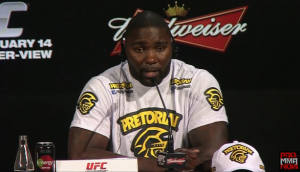 WSOF 5 will mark the promotion’s second visit to Atlantic City and will broadcast LIVE on NBC Sports Network. Tickets for the event go on sale this Friday, July 19, at 10 a.m. ET at all Ticketmaster locations, Ticketmaster.com and charge-by-phone at (800) 745-3000.

Johnson, 29, comes into the bout having racked up five straight victories since his departure from the UFC last year. He is 2-0 inside the WSOF cage, including a first round knockout win over DJ Linderman this past November and a unanimous decision over Andrei Arlovski in March.

WSOF 5 will mark Kyle’s debut with the promotion. The 33-year-old Strikeforce veteran is 2-2, 1 NC in his last five fights. He has fought twice so far this year, dropping a first round submission to Gegard Mousasi in Strikeforce in January, then bounced back with a 21-second knockout win over Travis Wiuff at CFA 11 in May.

Stay close to ProMMAnow.com (www.prommanow.com) as additional bouts will be announced in the coming weeks.

One thought on “Anthony Johnson vs. Mike Kyle to headline WSOF 5”