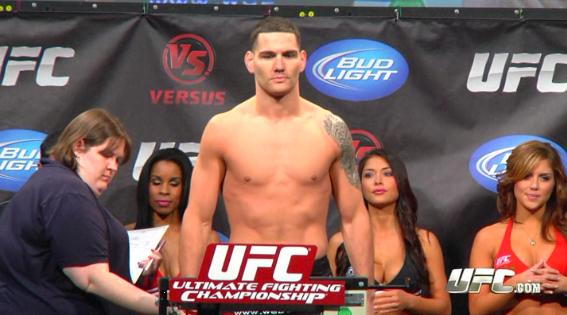 UFC middleweight contender Chris Weidman will face the greatest MMA fighter of all time in Anderson Silva at UFC 162. It’ll be his 10th professional fight on Saturday night.

There are many fans, pundits, and fellow fighters who think Weidman has the best chance of any middleweight to defeat Silva and end his reign which began in 2006.

There’s no question that Weidman has a skill-set that could pose problems for Silva. He has good wrestling, good control on the ground, and solid submission defense. I mean we all saw what a similar fighter in Chael Sonnen did to Anderson Silva in their two fights, but we also saw Sonnen lose in both their fights.

The question is:  Will Chris Weidman come to fight or win the belt against Anderson Silva?

You may say to yourself he has to come to fight if he wants to win the belt right? Not really, he could have a gameplan to stifle Silva against the cage or look to take Silva down to avoid the vaunted striking of “The Spider”. He could take Silva down and employ some Clay Guida/Jake Shields safe tactics of looking busy without doing any damage at all to win a decision.

Or he could take the Chael Sonnen approach and keep attacking and doing damage to Silva even though he has the fight in the bag because he’s dominated the first four rounds with his wrestling and ground and pound.

Of course, the latter cost Sonnen the UFC middleweight championship in his first encounter against Silva. However, I had more respect for Sonnen in that loss because he did exactly what he said he was going to do which was beat up Anderson Silva the entire fight even though he eventually lost.

The way Weidman wins may be even more important than if he wins on Saturday night. I think many people think he’s capable of taking Silva down each round and grinding out a decision. However, it would speak volumes if Weidman was able to dominant the champion while doing a good bit of damage or even finishing the champion.

Be sure to tune in on Saturday night to fight out as UFC 162 is set to take place on Saturday night at the MGM Grand Garden Arena in Las Vegas, Nevada. We’ll either see the most dominant reign in MMA history come to an end, or we’ll see the greatest champion of all time put another notch in his belt while continuing to cement his legacy.
[ads2]