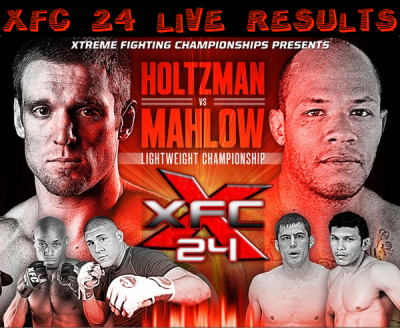 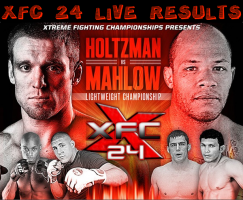 In the co-main event, Florida’s Reggie “The Regulator” Pena faces North Carolina’s Ricky “The Sniper” Rainey in a middleweight bout sure to produce fireworks. Also, dangerous 65-fight veteran Luis “Sapo” Santos looks for his 57th win as he takes on Washington’s Dave “Insane” Courchaine at welterweight.

In the lone women’s MMA bout on the card, Michigan’s Kelly Warren welcomes Arizona’s Cortney Casey to the pro ranks in a flyweight match-up. All this and much much more. The XFC 24 main card airs live on AXStv starting at 9 p.m. ET. ProMMAnow.com will provide LIVE results and play-by-play commentary of the action.

Round 1 – Touch gloves. Leg kick Casey. High kick from Casey scores. Leg kick. Again, body kick. The former soccer player has nice kicks. Now she blasts Warren with a couple right hands, clinch against the cage, knees from Casey. Warren is bleeding next to her nose under her eye. Big knee from Casey then unloads some punches backing Warren up to the center. Leg kick from Casey. Two big right hands, she pushes Warren to the cage. Now jumps on Warren’s back, both hooks in while standing and looking for the choke. Warren with two on one, preventing the full choke but Casey has one arm locked pretty well. Still standing leaning against the cage. Now she gets the full choke on and this fight is over. Pure domination for Casey in her pro debut.

Round 1 – Touch gloves. Forant comes out quick, shoots, switches to a single, gets Reynolds down to one knee but his back up. Forant never lets go, goes for the double. Reynolds dropping some elbows to his head. Tries to get on Reynolds back but falls off the front. Reynolds picks him up for a piledriver. Yes a real piledriver. High kick from Forant, but ducks right into a round kick from Reynolds. He clinches up, drops levels and gets Reynolds to his butt. Reynolds gets up and lands a knee from a Thai plum. High kick, left hand from Forant, clinch against the cage as Forant shoots in for the single, tries to take Reynolds’ back. Back to the feet they square up. Nice Thai plum and knee to Forant’s noggin. But Forant drives through for the takedown. Reynolds’ back to the cage, he gets to his feet, holding a standing arm triangle and…. Forant taps out! Amazing performance! It’s a Wrap!

And yes, we’ve got the GIF of the piledriver thanks to Mr. @ZProphet_MMA:

Round 1 – One high kick from Santos and Courchaine goes down. Santos follows up with seven quick punches as Courchaine lays there. The ref stops it. Courchaine gets up complaining but the ref says he took seven shots. Replay looks as though it could have been a bit quick as Courchaine was covering up but he got dropped hard. Sapo is a freaking BEAST! I want to see this guy in the UFC.

Round 1 – Pena comes out with the clinch. Body shots and knees from Rainey and takes top position as Pena tries for a trip takedown. Rainey on top in half guard. Pena gets full guard, trying to hold Rainey close, goes for an armbar, Rainey pulls out, landing some short elbows a few small punches but Pena defending well. Rainey almost in mount, lands a couple nice punches and he takes Pena’s back as Pena rolls over. Pena gets to his feet, looking for the takedown against the cage. Knee to body from Rainey. Body shots from Pena as they wrestle in the clinch. Body shot from Rainey, knee. Elbow over the top from Pena. Thai plum and a couple knees from Rainey. They square up for the first time in the fight. Rainey shoots in after a brief exchange. Rainey puts him on rubber legs after landing some big punches. Pena takes off running the other direction and runs right into a head kick. Pena goes down and Rainey finishes him off with massive punches knocking his mouthpiece across the cage.

Oh, you knew it was coming:

Round 2 – Touch gloves. Front kick and a right hand from Holtzman. Mahlow catches a kick, but loses it and slips back to the ground. Holtzman hops up and takes top control. Holtzman stacks him with punches, landing some nice shots as Mahlow tries to cover up. Holtzman in half guard dropping elbows that open up a cut and he’s bleeding badly now. Holtzman working the ground and pound, pushes Mahlow to the corner of the cage. Mahlow turtles up and Holtzman attacks relentlessly with punches and the ref steps in to save the bloody and battered veteran. Too bad we didn’t get to see Nick Newell vs. Holtzman but maybe one day!