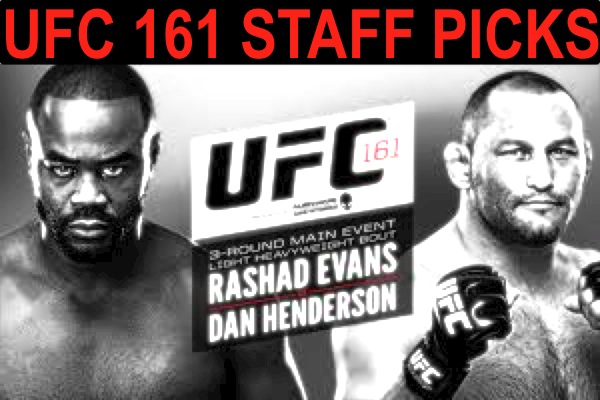 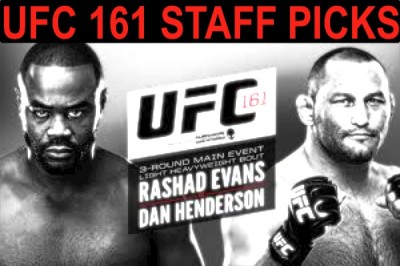 The ProMMAnow.com staff has assembled for you our most informed prognostications, our most educated predictions and best guesses at who we think will win at UFC 161. Can Rashad Evans really make a another run at the title or will Dan Henderson convince him it’s time to hang it up? Will Roy Nelson finish his UFC contract on a win? Will Ryan Jimmo get to do his robot dance? Will Pat Barry get to keep his job? All these questions and more could be answered at UFC 161 on Saturday and here’s how we see it all going down.

DENNY HODGE: Rashad hasn’t looked the same in quite some time, and he’s going to need to be in top form to avoid becoming a KO victim in this fight. If he fights smart from the outside, he has a definitive speed advantage, but at times he’s proven content to stand in the pocket and exchange also. If he does with Henderson, this fight could be over quickly. Evans can’t win in the clinch against Henderson so it will be about his ability to score on the feet. Henderson will cut off the angles as Evans tries to circle away, and it only takes one right hand to finish the job. Henderson by TKO.

JAN GAETJENS: Sometimes is seems like Hendo is resistant to aging, but there inevitably comes a point where an aging fighter simply can’t sustain. Normally, at 42, for someone who is as willing to stand and trade as Henderson, that point is not far from sight. Every time Henderson steps in the cage at this juncture is, despite his ability to still go the distance, a test of whether or not there is one more H-bomb left in the chamber. Evans by decision

BRIAN FURBY: Henderson has the power to KO anybody in the 205 division, if he can catch them. Rashad has never had a great chin, and if Hendo lands with either hand, Rashad is going down. That being said, what will make the difference in this fight is Rashad’s ability to keep the distance and move faster than Hendo. The longer the fight goes on, the more it favors Rashad. Despite Rashad’s claim that he’s worked on getting his swagger back, I don’t think it’ll make a difference. Hendo by KO in Round 2.

JACK BRATCHER: To me it seems Rashad Evans has lost his drive. Maybe I’m wrong. I hope I’m wrong. I feel like he already has one foot out the door of retirement. I think Dan Henderson is going to take his head off. Hendo via knockout.

DENNY HODGE: Miocic has the reach advantage and he’s a better technical striker than Nelson, but Nelson always seems to find a way inside and land with monster shots. Miocic would be wise to use his footwork to land then get back out of range, picking Nelson apart. Will Nelson stand and try to end this, or take the fight to the mat and put it away there? I think he engages on the feet, and I’m going with the upset here. Miocic by TKO.

JAN GAETJENS: Generally when a brawler like Miocic is coming off a big (T)KO loss, he’ll attempt to renew his gameplan and come out more conservatively. Pairing him with Nelson however will most likely result in Miocic having no choice but to stand and trade some bad intentioned exchanges early. Miocic by (T)KO

BRIAN FURBY: I like Miocic, and despite his lackluster loss to Struve, he’s still a solid prospect. In spite of that, Nelson is much higher up the heavyweight ladder and I see this as a terrible matchup for Miocic. He’ll have a reach on Nelson, but it won’t take long for Nelson to find his way inside and put Miocic down for the count. Nelson by KO in Round 1.

JACK BRATCHER: This is the last fight on Roy Nelson’s contract. He’s Everyman. Captain Dana wants him to cut his hair, lose his gut and shave his beard. But you’re not going to tell Nelson what to do and he’s proven he’s one of the best fighters in the world. I’d love to see Roy Nelson get a shot at the UFC title, but I honestly think that would be captain Dana’s nightmare and he’s probably going to let Nelson walk. I hope I’m wrong. Nelson by knockout.

DENNY HODGE: Jimmo faded against Te Huna in his last fight after a pretty good start. He’s as tough as they come, surviving some big shots in that fight to lose a decision. Pokrajac has had trouble with his consistency as of late, and needs a good showing in this bout. Look for both guys to get off on the feet early. Pokrajac will try to get the fight to the mat, but Jimmo is an explosive athlete, and will not be easy to keep grounded. Look for Jimmo to win the exchanges and the fight by decision. Jimmo by decision.

JAN GAETJENS: Jimmo’s run in with James Te-Huna was somewhat of a ‘welcome to the UFC’ moment for him, as his 7 second tangle with Anthony Perosh wasn’t really an accurate litmus test for Jimmo’s prospects in the promotion. I see him coming back smarter, and more capable of controlling a fight through the second round. Jimmo by decision

BRIAN FURBY: Jimmo vs. Pokrajac will be one of the few fights that goes the distance on this card. Pokrajac has the edge in UFC experience, but Jimmo is no stranger to fighting well-known opponents under the bright lights. Pokrajac’s best hope is to end it early, but Jimmo’s experience will see him able to keep Pokrajac effectively shut down for three rounds. Jimmo by unanimous decision.

JACK BRATCHER: This should be a fun fight. Both guys are looking to get back on track as Jimmo is coming off his first loss in 17 fights and Pokrajac is coming off an NC and a decision loss. Gotta go with Jimmo via TKO if for no other reason than I want to see that damn robot dance every chance I get.

DENNY HODGE: The ladies get back into action on the main card and it should be a good one. Sexton hasn’t been as active of late but has won 3 straight. Davis is a beast on the ground and is looking to extend her win streak as well. The ladies will mix it up on the feet, but the fight will be determined on the ground. Look for Davis to control the action on the mat and win her UFC debut by submission. Davis by sub.

JAN GAETJENS: Davis’ ground game and experience in major WMMA competition should spell a convincing Octagon debut and a major step in distinguishing herself in a division hungry for contenders to emerge. Davis by submission

BRIAN FURBY: Davis and Sexton make their UFC debuts as relative unknowns to the casual MMA fans despite the fact they both have 15 or more pro fights on their records. Sexton hasn’t fought in just over a year, and her fight before that one was over a year prior as well. Davis has stayed active, with the only loss in her last six fights being a majority decision loss to Sarah Kaufman. Both women will be looking to impress with their UFC debuts, and I like Davis to win. Davis by submission in Round 2.

JACK BRATCHER: Sexton’s only losses have come to two great kickboxers, Zoila Gurgel and Gina Carano. Both ladies specialize in the submission game and it should be a competitive bout but I got the Dr. Sexton by decision (or maybe submission).

DENNY HODGE: Two hugely powerful guys face off in this fight. I can never pick against Barry it seems… you just never know what will happen when he’s in the cage. Jordan is no pushover, and is a seriously athletic fighter. It will be a battle of wills in the clinch, but Barry will do damage with leg kicks to set up his hands in this one. Barry by TKO.

JAN GAETJENS: Huge power vs. power matchup here; flip a (slightly Jordan weighted) coin as to who tags who first though. Don’t discount the possibility of a three round decision slugfest though. Jordan by decision

BRIAN FURBY: Anybody want to guess how many times Barry and Jordan will be referred to as “knockout artists”? Say what you will about Barry, but he comes to fight. I do think he’s been on the wrong end of too many T/KOs in a short amount of time to have a stable long-term career, but for the moment, he still seems to have his wits about him. Jordan may want to take this to the ground where Barry seems to flounder (at best), but I think Barry will keep it on the feet long enough to collect another KOTN bonus. Barry by KO in Round 1.

JACK BRATCHER: I can’t pick against Barry even when I think I should. I don’t know why. Maybe it’s because he has so much potential and if the military could find a way to harness the power in his leg kicks it would immediately induce peace on Earth because every threat to our security would absolutely shudder in fear. It’s kill or be killed with Barry and I love that about him. Barry by KO.
[ads2]