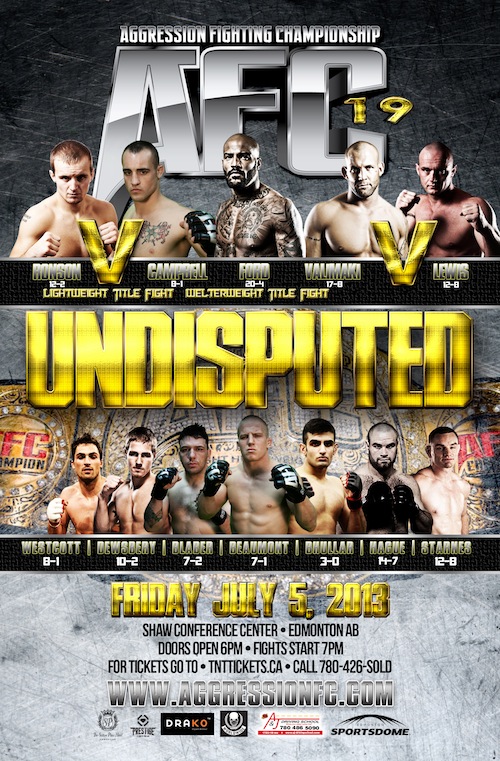 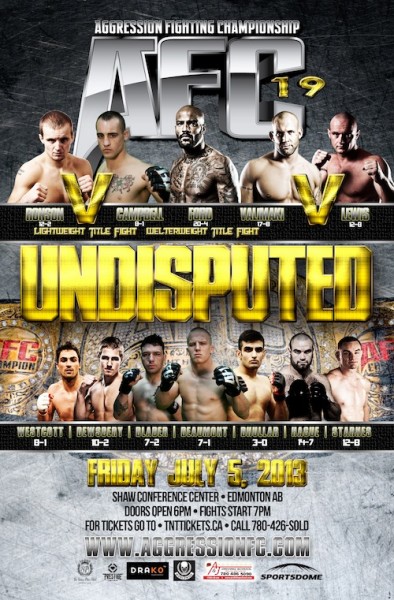 Never in the history of what is arguably the Mecca of MMA in Canada has the city of Edmonton’s fight fans been more excited about an event. The cities biggest and brightest stars will all be showcased in one night at the Shaw Conference Centre.

In the night’s main event, the best Canadian fighter not in the UFC, Ryan “The Real Deal” Ford (20-4), will look to once again put on for his city with 13 pounds of gold at stake. Ford’s original opponent Joel Powell (7-3) who just narrowing edged out Michael Hill (5-1) with a split decision in last Sunday’s #1 contender fight has been forced to withdrawal with an injury. The Ultimate Fighter reality star Michael Hill was one round or one judge away form earning this fight himself and had let the AFC know if Powell wasn’t able to fight he would love the opportunity. After AFC matchmaker assessed the situation for potential opponents, only Michael Hill wanted to step up and fight Ford for the vacant AFC welterweight title.

The Co­-main event will showcase the two best Canadian strikers in the Lightweight division as Shane Campbell (8-1) looks to defend his AFC lightweight title against #1 ranked Jesse Ronson who is riding a 7 fight winning streak. In addition, the long awaited return of Dwayne “D­Bomb” Lewis (12-8) will lock horns with UFC veteran and very dangerous Victor Valimaki (17-8) in a Light heavyweight tilt that will have title implications.

One of Edmonton’s favorite fighters former AFC champion Stephen “Big Bad” Beaumont (7-1) will look to take one step closer to regaining his belt when he welcomes AFC newcomer Brandt Dewsbery who boasts a very impressive (10­-2­-1) record.

5x UFC veterans Tim “The Thrashing Machine” Hague (14-7) and Kalib Starnes (13-8) will battle in what has been one of the most intriguing matchups announced. Hague returns to the AFC cage looking to use his power when he meets Starnes. While Starnes comes to the cage with a reignited fight­ing spirit, after a fight of the year candidate against Joe Doerksen (49-16) at AFC 11, and picking a big TKO victory against David Perron (5­-2) last Sunday night at AFC 18.

In what could be dubbed the battle of big cats, Aggression Fighting Championship’s (AFC) top prospect KB “Bengal” Bhullar (3­-0) looks to stay undefeated in what will be his toughest test to date in Derek “The Lion” Parker (3­-1­-1). Parker’s infamous hockey brawlers team the Jonquiere Marquis just captured the Can Am Cup Championship and Parker will now look for victory off the ice and in the cage.

Another fighter with endless potential Sheldon Westcott (8­-1­-1) will be in action as well taking on Alaska’s Thomas Ide (15­-7).

In a battle of 2 undefeated fighters, Denny Houle (4-0) will try to keep his “0” intact as he faces off against Fort McMurray’s Teddy Ash (1­-0). Capoeira sensation Marcus Vinicios (5-7) will look to showcase his acrobatic attacks against a tough Steve Dubeck (4-5).

When asked about the event AFC executive Moin Mirza had this to say, “I’m thrilled to be able to deliver an event like this to our amazing loyal fans.” AFC matchmaker Darren Owen added, “This is what the AFC is all about giving our fans the fights they actually want to see.”

The 19th installment for AFC will take place at the Shaw Conference Centre in Edmonton, Alberta on July 5, 2013. AFC will then head down to Calgary for AFC 20: Stampede Fight Night on July 12, 2013.

AFC Fighters, Darren Owen, Moin Mirza, and AFC representatives are available for interview by phone, in­person, or in writing.