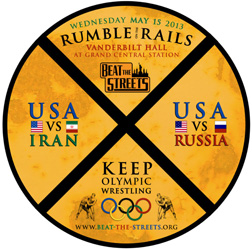 USA Wrestling, NBC Sports Network and Universal Sports combine to present “The Rumble on the Rails,” live wrestling featuring the national teams from the USA, Iran and Russia, from Vanderbilt Hall in historic Grand Central Terminal in New York City on Wednesday, May 15.

NBC Sports Network’s coverage is also available on NBC Sports Live Extra – the NBC Sports Group’s live streaming product for desktop, mobile and tablets and, in most cases, on the digital platforms of participating cable, satellite, telco and other video subscription services – via “TV Everywhere,” available on an authenticated basis to subscribers of these services.

Coverage continues with USA vs. Russia from 6-7:30 p.m. ET on Universal Sports. This event will feature competition in all three Olympic styles of wrestling. It is expected that some experimental wrestling rules will be used, as part of the international effort to improve the sport of wrestling. This match will also be streamed live on UniversalSports.com to authenticated users.

Knapp will handle the play-by-play of this event as well, with reporting from Roberts. The color commentator for this match is yet to be announced.

Lineups for the USA, Iran and Russian teams will be announced shortly.

“The Rumble on the Rails” is part of the annual Beat the Streets Gala, which will be held following the competition at Bryant Park Grill, and raises funds for youth wrestling programs in New York City. It is also a showcase competition as part of World Wrestling Month, which was declared by the international wrestling federation FILA.

This is the second straight year that NBC Sports Network and Universal Sports have aired a major wrestling event affiliated with the Beat the Streets Gala. In June, 2012, these networks both aired “The Grapple in the Big Apple” from Times Square in New York City. ”The Grapple in the Big Apple” featured a USA vs. Russia freestyle dual meet and the U.S. Olympic Team Wrestle-off for the 60 kg/132 lbs. position on the U.S. Olympic Team in men’s freestyle wrestling.

As part of World Wrestling Month, “The Rumble on the Rails” is an important event in the Keep Olympic Wrestling movement, an international effort to retain wrestling as a sport on the program of the 2020 Olympic Games and beyond.

A division of the NBC Sports Group, NBC Olympics is responsible for producing, programming and promoting NBCUniversal’s Olympic coverage. It is renowned for its unsurpassed Olympic heritage, award-winning production, and ability to aggregate the largest audiences in U.S. television history.

NBC has won an unprecedented 96 Emmy Awards for its Olympics coverage, as well as a prestigious Peabody Award for its presentation of the Beijing Opening Ceremony in 2008, which USA Today said was “the best overall Olympic experience ever provided by a U.S. network.”

In addition to its unsurpassed heritage and award-winning production, NBCUniversal is known for aggregating large Olympic audiences, as nine of the top 11 most-watched U.S. television events of all time are Olympic Games presented across the networks of NBCUniversal. The London Olympic Games rank No. 1 with more than 217 million viewers.

3 thoughts on “NBC Sports and Universal Sports to air USA vs. Iran vs. Russia wrestling May 15”