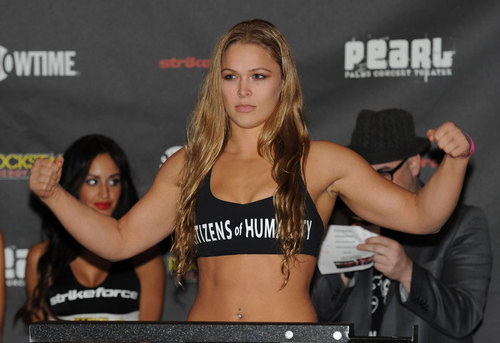 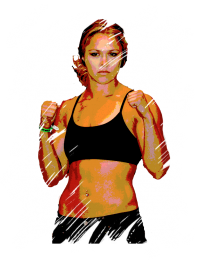 UFC welterweight champ Georges St-Pierre has won his last 11 fights in a row. Eight of those wins came via decision including his last six in a row. And for that reason the champ has taken some criticism for “playing it safe” and his seeming inability or unwillingness to try and finish fights.

One of GSP’s critics is UFC women’s bantamweight champion Ronda Rousey. A guest on the Bryan Callen Show this week, Rousey talked about the difference in fighting styles of St-Pierre and the person she said she most likes to watch in the UFC, Nick Diaz:

“GSP goes in there to win matches and Nick goes in there to try and f— the other guy up. And if he ends up winning then that’s awesome. … I respect Georges as an athlete and as a businessman, but as a fighter, the guy doesn’t fight, he wins matches. He doesn’t come in to fight, he comes in to win. There’s a huge difference.”

Maybe you think Rousey is out of line. But if anyone knows about finishing fights, it’s Rousey. Seven pro fights. Seven wins. Seven finishes. All in the first round. And before Rousey turned pro, she had three fights as an amateur as well. Oh and she finished all those in the first round too.

On a separate note Rousey said there was one fighter in particular she always looked up to and tried to model herself after… Can you guess who?

His name is Fedor.

Listen to  Bryan Callen’s entire interview with Ronda Rousey at www.BryanCallen.com. UFC heavyweight Brendan Schaub is also on the episode.

1 thought on “Ronda Rousey: ‘GSP doesn’t come in to fight, he comes in to win’”