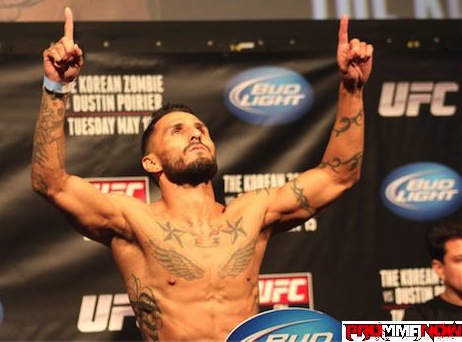 Before he injured his hand in training, rising UFC bantamweight Francisco “Cisco” Rivera (9-2, 1 NC) was supposed to fight on this weekend’s UFC on FOX 7 card against undefeated Brazilian Hugo Viana (7-0). TJ Dillashaw has since stepped in and will face Viana as part of the preliminary card on FX.

Cisco was a guest on Pro MMA Now Radio Sunday night and we spoke to the 31-year-old California native about his injury, when he should be able to return to action and who he might like to face next. Yes, we also discussed his KO win over Roland Delorme being overturned due to him testing positive for a banned substance.

There was some frustration evident in Cisco’s words. Not only about the setback of having his KO win overturned and his injury, but about having been put on the Facebook prelims in his last fight, about not being ranked among the top 10 even though he’s knocked out four of his last five opponents.

One thing is for certain. Francisco Rivera believes in himself. He believes he’s among the best in the UFC’s 135 pound division and just wants the chance to prove it. Oh and by the way, he’s on the title hunt. Did I mention he’s knocked out four of his last five opponents?

The following is a list of notable quotes from the interview, along with the audio of the entire episode.

(1:04:19)
“Man all I need is just one punch. I know that any one of my punches can knock any of them out. It’s just a matter of stuffing their takedowns and trying to get that punch that counts. If that happens I can knock out anybody, especially at that weight class [135 lbs].”

(1:05:20)
“The first stint with them [UFC], having those two losses, really really took a toll on my career. So I had to get my head right and back to training full time. In the second stint I knew I could not lose and that’s all that was in my mind was not losing, not losing, not losing, just fight. And I did and it’s been going good so far. I just need to keep it going, try to make the top 10 bantamweight and then start fighting for the belt. I need to get noticed. I think it’s unfair that the UFC sometimes has their televised bantamweights that they put on and if my fights were shown more, I’d probably be ranked up there. It’s just a matter of time. I’m going to take my time; whoever they give me I’m going to fight and just keep performing the way I do and hopefully they start noticing and I can get a title shot.”

(1:06:25)
“I’m back to training full time. I’m taking good care of it. Therapy every day. Wrapping it and taping it every day, keeping it safe and making sure it’s well taken care of in training, so when it comes fight time it will be 100 percent. So I’m looking to come back in maybe June or July. … We called and told them we’re ready to fight in June or July and let us know what he has. We should be finding out in maybe a week or two, so we’ll see.”

(1:08:59)
“Yeah I see Scott Jorgensen fought on the Facebook prelims his last fight and then got a main event fight. That’s just like, man I don’t understand, I guess maybe seniority or he’s gotten more fights, but, I don’t know why they did that. I’m sure my time will come and when it comes it ain’t going to be like that, wrestling and trying to lay and pray. I’m trying to knock somebody out, or to get knocked out. I’d rather put on a show and get knocked out than just sit there and keep trying to wrestle on the ground.”

(1:11:13)
Asked if he felt was being punished in his last fight being put on Facebook after testing positive for the banned substance in his fight against Roland Delorme at UFC 149:
“I mean it’s possible. I really don’t know. I don’t know who does the whole TV slots or whatever. It’s very possible. I talked to Sean [Shelby] and the UFC about what had happened. It was an honest mistake. It wasn’t like a steroid. It was just a simple GNC store item. I don’t have the money to hire nutritionists and stuff like that so I go and buy what I think I need. It was an honest mistake. I think maybe it happened but I’m sure they regret doing it. But it is what it is, so I’m just going to think forward and get past that and keep going forward.”

(1:13:20)
Asked how many fights he thinks he is from a title shot:
“Yeah, I think at least two wins, and if they’re knockouts, definitely. How can you not? What bantamweight do you know in their last five fights, four of them were knockouts? I’m finishing fights. Decisions are rare and if it’s a decision it’s because the guy is running away, running away trying to get away from me. He’s not standing and letting his hands go. That’s what I liked about Figueroa. He stood there and he fought. He didn’t care if he was getting knocked out or not. And he’s never been knocked out in any of his fights, and he fought the number one contender Michael McDonald and Michael couldn’t even finish him. Just I think two and then hopefully they start noticing [me] to be talked about for a title shot.”

(1:15:10)
“I’d like to fight on that Boston card. They’re bringing in I guess that Fox Sports new deal, so maybe that. And I know Boston is Dana White’s hometown so to fight down there would be cool. Or even Fox in Seattle, that would be a good one. Whatever they give me though I’m willing to take. I’m not really picky about where.”

(1:16:43)
“I’m back to training. I was still training when I hurt it I just wasn’t using it. I was working on my left hand and my jab, my hooks, doing a lot of kicks, a lot of conditioning with my legs, just not using my hand, and now I’m back using it again. It’s the same hand that happens to me every fight. I always hurt it every fight. I just punch too hard for my size, so it’s the same thing. It’s the same injury I’ve had before so I already know how to take care of it, let it heal and then come fight time it’ll be ready.”

(1:17:35)
Asked about the possible need for surgery on his hand:
“They’ve talked about it but I’m the one that doesn’t want it yet. I’ve known a lot of my friends and training partners have had hand surgeries and they’re like man don’t do it. It’s still the same, they complain or they say something about it and then I’ve had guys who’ve broken their hand and just let it heal naturally and just let it build calcium and let it get stronger and it’s just a lot stronger. So we’ll see what happens.”

(1:18:15)
“Maybe like a Brian Bowles, he’s a top 10 bantamweight, but I know he’s fighting Roop. I even told Sean if Roop gets hurt, call me I’ll fight Bowles. … Brad Pickett just fought and won. He’s a top 10 bantamweight and I know he likes to stand and bang. It doesn’t matter, whoever is on the roster and winning as long as it’s somebody, and hopefully they put me on a TV spot so I can put on a show.”