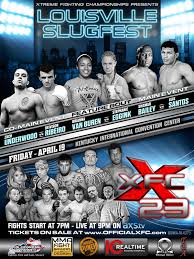 Luis “Sapo” Santos (54-9-1) has quite the resume going into his XFC 23 “Louisville Slugfest” match up with Shamar Bailey. Santos has recorded 54 wins in his mixed martial arts career that dates back to 2000. He brings that experience into a fight with a solid wrestler and UFC, Strikeforce and Bellator veteran in Shamar Bailey (15-8-0).

Santos started his career on fire with 12 straight victories. Santos made his way to Bellator where he defeated XFC veteran Nicolae Cury and got the nod over Bellator’s Dan Hornbuckle. Training at American Top Team Santos is looking for a championship run in John Prisco’s promotion. At the age of 33 he has started a new chapter in his carer by signing a multi-fight deal with the XFC.

We were able to get a few thoughts from Luis. His English is still coming along but we could tell his excitement and energy for his main event affair in Louisville.

In talking about his contract and fight with the XFC, Sapo said, “It was a big step in my career. I am feeling great and have had a great camp.  Things have been going very well and I am ready to get this big win. I am very focused to get a world championship.”

With the main event airing live on AXS TV and broadcasting to over 45 million homes we asked Luis if there were any nerves and what the fans could expect if they have never seen him fight.

“This is normal for me,” Santos said. “I have over 70 victories in my career. I will be 100% for this fight. I think this fight will be memorable for the XFC fans. I look forward to many more big fights in the XFC.”

Luis has a strong support system of training partners and sponsors that he wanted to make sure to thank. “First I want to thank God, my SFT Team, ATT E Dragoes Negros, my coaching staff, Romulo Needle, Carina Damm Fampa Custodio, Master Liborio and Katel my sponsors that I give the greatest support Vicious Clothing, Intimidation Clothing, SEEL (Secretary of State for Sports and Leisure), Marcios Hair Fashion and Dr.Tangui Gomes Orthopedic and Traumatologist.”

Santos vs. Bailey headlines XFC 23 that takes place Friday April 19th at the Kentucky International Convention Center in Louisville Kentucky. The main card airs live on AXS TV. We will be there live to bring you all of the results and interviews from this huge event in the Bluegrass State.