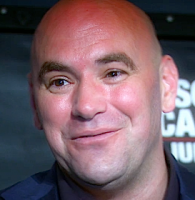 Following the TUF 17 Finale  Saturday night in Las Vegas, UFC President Dana White shared his thoughts on everything that went down, including the defeat of Uriah Hall who was the man most thought would be crowned the next “Ultimate Fighter”.

White said, “Tonight he looked like he folded under the pressure, like he didn’t even want to be in there. He didn’t even wake up until the second round.” White was thoroughly impressed with all the TUF 17 fighters on the card and their performances and said this season’s fighters compared to last season is “like night and day”.

White also shared his excitement about the Cat Zingano vs. Miesha Tate fight. He said he’s not sure why the women’s fights are so exciting, whether it’s because they feel they have more to prove or they are inherently just meaner than men.  White also talked about the UFC’s upcoming move to FOX Sports 1 and a recent conversation he had with boxer Andre Berto about possibly fighting in the UFC.

One of the most interesting aspects about this interview is not so much what White said, but what he didn’t say. Not one word was mentioned of the night’s main event between Uriah Faber and Scott Jorgensen. Faber won that fight via submission in the fourth round, and it was a decent fight. However, many fans watching the TUF 17 Finale Saturday night seem to feel Tate-Zingano was the “real” main event.

What are your thoughts — how did the main event stack up in entertainment value to Tate-Zingano or Hall-Gastelum?
[ads2]
[ads1]