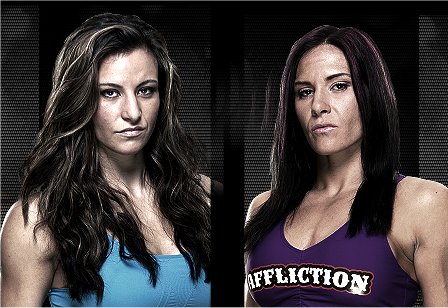 Miesha Tate opened the bout charging across the octagon and getting an early takedown. After a scramble, the fight resumed on the feet with Tate controlling Zingano with a standing guillotine. Tate drove Zingano into the cage but quickly found herself in a very tight guillotine. Tate used a trip takedown to escape then landed with a flurry of left hands, forcing Zingano backward. Tate managed another takedown but got swept, then both fighters engaged in a big exchange that brought cheers from the crowd. Tate secured yet another takedown late in the round, landing some short elbows to end an exciting round.

Zingano came out with a flying knee to open the second, but Tate fired back with her stiff jab before driving for another takedown. From there, Tate opened up with her patented ground-and-pound. Tate then secured an arm and nearly got the tap with a tight armbar attempt. Zingano created space and got the sweep but gave up a leg in the process. Tate threatened with a heel hook but Zingano defended perfectly, then pounded on Tate with right hands and elbows from the top to finish off the second stanza.

Zingano came out pushing the pace in the third landing her stiff jab to start. Zingano changed levels and executed a picture-perfect shot to put Tate on her back. From there Zingano took control of the bout.

She punished Tate with a furious attack from the top landing a brutal barrage of ground-and-pound. Tate simply had no answer to the top control of Zingano. Just as Tate tried to make her way to her feet, Zingano unleashed a flurry of knees to the face, putting Tate on the cage. A final flush right elbow dropped Tate and forced referee Kim Winslow to step in and stop the fight at the 2:55 mark of the final round.

The victory keeps Cat Zingano perfect at 8-0 (1-0 UFC), but more importantly sets her up with a shot at UFC women’s bantamweight champion Ronda Rousey.