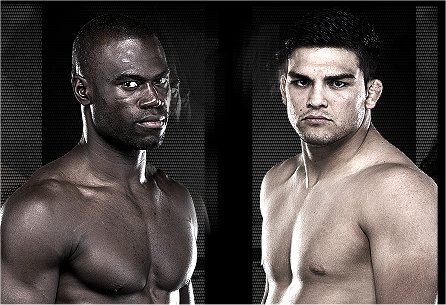 It was the overwhelming favorite against the ultimate underdog.

Most fans expected Uriah Hall to continue his unstoppable run and earn the title of “The Ultimate Fighter,” but someone forgot to tell that to Kelvin Gastelum, who derailed the hype train of Hall with a split decision victory (29-28, 28-29, and 29-28).

Gastelum showed little regard for the striking of Uriah Hall to start, charging forward and closing the distance on the dangerous striker. Hall remained hesitant with the constant threat of the takedown, and Gastelum started to take control of the round with his lunging left hand and successful takedowns. One of those lefts staggered Hall, and Gastelum took advantage driving Hall into the mat with a strong takedown. Gastelum scored from the top with punches to the body and short elbows inside. After a return to the feet, Hall secured a late takedown of his own but the round belonged to the underdog.

Gastelum came out confident in the second, landing his kicks to start. Hall fired back with kicks of his own, then followed up to the body. Hall then got his jab on track as he finally started to get his rhythm. Gastelum secured another takedown but this time Hall was able to reverse. After a scramble to the feet, Hall landed a flush knee up the middle. Gastelum continued to wing punches to score but got taken down by a perfectly timed trip from Hall. Hall continued to showcase his wrestling skills, landing a big suplex after Gastelum got back to his feet.

Hall showed a sense of urgency to start the third as the fight looked even at a round apiece, peppering the lead leg of Gastelum with stinging kicks. Gatelum remained relentless in his pursuit of Hall however, and earned yet another takedown. Hall executed a nice reversal during a scramble and then proceeded to land a flurry of big shots from the top as Gastelum covered up to avoid the onslaught. Gastelum managed to recover quickly, bouncing to his feet and resuming the chase of Hall. He then landed a leaping left hand and an inside kick before driving for a crucial takedown. From there he controlled much of what was left of the round, landing some solid left hands to the face of Hall. Hall fired back from the bottom position and scrambled late but the bell sounded before he could mount any more offense.