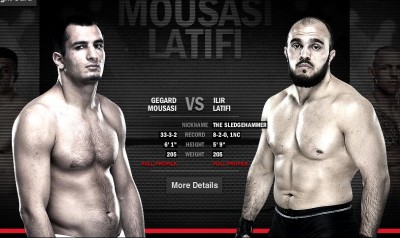 The UFC on FUEL TV 9 card will feature a new main event due to the unfortunate cut sustained by Swedish light heavyweight Alexander Gustafsson. He was due to take on former Strikeforce light heavyweight champion Gegard Mousasi. However, Mousasi will now be facing another Swedish fighter in Llir Latifi who comes into this bout as a huge betting underdog. Let’s see if he has the tools to pull off the upset.

Latifi (8-2, 1NC) comes into this bout off of a unanimous decision win against Jorge Oliveira in October 2012. The Swedish fighter active last year, rattling off three consecutive wins after fighting only once in 2011 where he lost to Bellator veteran Emmanuel Newton. Latifi has finished opponents in six of his eight wins, and has only been finished once in his career that began in 2008.

Mousasi (31-3-2, 1NC) comes into this bout off his first round submission win over Mike Kyle in January of this year. It was his first win in over a year after sitting on the sidelines all of 2012. Mousasi has won multiple fights via knockout and submission, and hasn’t lost since April 2010 against King Mo Lawal.

Mousasi is well documented in his travels and is known as a very well rounded fighter who can strike on the feet while also being well versed in submissions on the ground. The one hole in his game this far has been his takedown defense and lack of size as a light heavyweight. Latifi comes into this fight as a relatively unknown fighter. However, we do know he has a background in wrestling and appears to be compact and powerful according to his physique(which isn’t the best way to determine a fighter’s attributes I might add).

The footage I saw of Latifi was limited, but it did provide a glimpse of what the Swedish fighter is capable of in the cage. He has as propensity to grab a single leg from close range and turn the takedown attempt into a high crouch slam. When on the ground he did throw some very powerful ground and pound techniques. He also displayed the ability to time/duck punches and change levels for a good double leg takedown as well.

The two concerns for Latifi will be the reach advantage Mousasi will have, and the fact that he’s taking the fight on less than one weeks notice. His cardio will more than likely be an issue which will be bad news against a fighter like Mousasi who has the ability to finish with the best of them.

If Latifi can keep the pressure on Mousasi, keep him moving backwards and have success with his wrestling, he can absolutely pull off the upset. It’s going to take him fighting a near perfect fight, but Mousasi does allow his opponents to dictate the fights sometimes. If Latifi can have some success early and steal the first couple of rounds of this three round fight it could get interesting.

Mousasi does have wins via submission from his guard, so he’s dangerous everywhere and Latifi will have to be weary of armbars and triangles if he decides to stay in Mousasi’s guard. I have to give props to Latifi for stepping up and taking this fight. He has nothing to lose, but Mousasi should come away with the victory on Saturday.