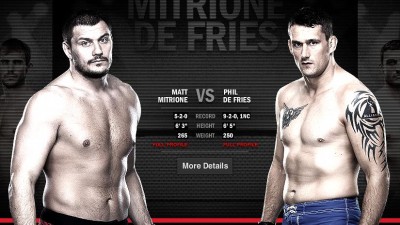 The UFC on FUEL TV 9 main card will feature a heavyweight battle between Matt Mitrione and Phil De Fries. Both fighters are coming off losses in their last outings in December and will be looking to get back on the winning side of things. Let’s see how this one breaks down below:

Mitrione (5-2) comes into this fight off his KO loss at the hands of Roy Nelson at the TUF 16 Finale in December. Mitrione is actually riding a two fight losing skid after starting his career winning his first five fights (all in the UFC). He has won four of those fights via TKO/KO. The former football player is very athletic for a heavyweight and long limbs with power. His ground game is questionable, but he does show the ability to stop takedowns and/or get back to his feet.

De Fries (9-2, 1NC) comes into this fight off his TKO loss at the hands of Todd Duffee at UFC 155 in December. The heavyweight is (2-2) in the UFC with eight of his nine career wins coming via submission. However, he has been stopped via TKO/KO in both of his losses.

This fight isn’t very hard to break down as it’ll be a fighter that likes to strike (Mitrione) against a fighter looking to get the fight to the ground (De Fries).

These two fighters were supposed to meet at UFC 155, but both took short notice fights instead when Mitrione stepped in to fight Nelson when Shane Carwin got hurt.

Mitrione will have the advantage on the feet with a three inch reach advantage. He’s also more agile and harder to hit according to Fightmetric while also being the more accurate striker. He stops about half of takedowns attempted against him with De Fries landing about half of the takedowns he has attempted.

Those variables indicate that this fight will probably play out on the feet which means Mitrione should have the advantage.  De Fries would be wise to close the distance and put Mitrione against the cage and try to trip him to the mat with a leg trip of some sorts. I don’t think he has the flat out ability to take Mitrione down in the middle of the cage. Mitrione needs to use good movement and avoid moving straight back when De Fries attacks or comes forward. If he avoids the ground, I think Mitrione finishes De Fries or wins a dominant decision.

One thought on “UFC on FUEL TV 9 preview: Matt Mitrione locks horns with Phil De Fries in a heavyweight battle”