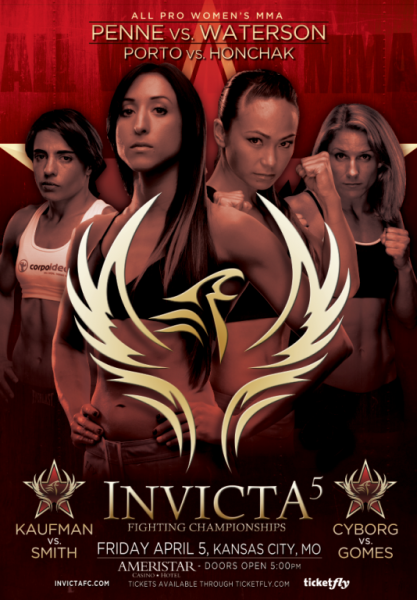 [ads2]
Invicta FC 5 takes place Friday at Ameristar Casino Hotel in Kansas City, Mo. The event is headlined with an Atomweight title fight as Jessica Penne puts her title on the line against Michelle Waterson. In the co-headliner Barb Honchak and Vanessa Porto square off for Invicta’s inaugural Flyweight title. The ProMMAnow.com staff weighs in with their thoughts and predictions on each of the main card bouts.

GARY THOMAS: Jessica Penne has been unstoppable settling in at 105 pounds. Her Invicta debut was bloody and fun to watch. Waterson has been on a streak herself. WIth both fighters coming from such great camps it makes it tough to call. I can’t really pick against the champion though. Although Michelle wins for best nickname. Pick – Penne via submission Round 3

JACK BRATCHER: It’s interesting that both these ladies have 10 wins with identical methods of finishes. Both have 2 wins via (T)KO, 6 via submission and 2 decisions. I’d definitely give Waterson the overall striking advantage although I do like Penne’s boxing. She doesn’t seem to check leg kicks very much and look for Waterson to try and take advantage of that. I think the difference in the fight will be Penne’s wrestling and I see it probably going the distance with Penne getting the decision or possibly even a submission finish.

GARY THOMAS: Title fights are so fun! Barb Honchak is on a roll and impressive in her wins. Porto as well so this fight is a tough one to call.Porto is so tough but I like Honchak to pull this off. Pick – Honchak via Decision.

JACK BRATCHER: Although most of Porto’s 15 wins have been via submission, this girl throws some bombs. Her domination of Tara LaRosa at Invicta FC 3 was pretty spectacular. Honchak is not as dynamic and most of her fights end up going the distance. She’s fairly well-rounded but I have to go with Porto here via (T)KO.

GARY THOMAS: Much respect to Fiona Muxlow for taking the fight against Cyborg. That being said don’t blink. Cyborg will finish this with the quickness. Cris Santos via Submission to strikes Round 1.

JACK BRATCHER: This of course will be Cyborg’s first fight since Dec. 2011 when her win over Hiroko Yamanaka was overturned to a No-Contest after she tested positive for steroids. The woman has 10 wins with 8 of those coming by knockout. She’s nothing short of a beast in the cage and she’s facing a 35-year-old lady with exactly one win via (T)KO. Half of Muxlow’s wins have come via submission (Cyborg has no wins via submission) but Cyborg is so strong the chances of her getting caught in a submission (at least against Muxlow) is slim to none. Look for Cybrog to make her return with a vengeance via first round (T)KO stoppage en route to that eventual showdown with Ronda Rousey that MUST one day happen!

GARY THOMAS: Sarah Kaufman looks for redemption coming off her arm bar loss to Rousey. Smith is hungry and has put on some excellent fights in Kansas City. I think this will be a strong match up but I feel Smith will have the edge. I hate picking against Kaufman but the crystal ball says it isn’t in the cards. Pick – Smith via Decision

JACK BRATCHER: I think I’m looking more forward to this fight than any other fight on the card. Both these ladies like to stand and bang and most of their wins have been via (T)KO. Neither have any wins via submission. I really like Leslie Smith’s aggression and she really reminds me of a female Nick and/or Nate Diaz with her stand-up — they even have similar body types, and of course, come from the same camp. I have to go with the veteran here because of her technical advantage. Kaufman’s disciplined striking and footwork should be able to out-point Smith en route to a decision win. There is a chance Smith could overwhelm her but because of her heavy experience advantage I have to go with Kaufman.

GARY THOMAS: Zoila Gugel can now put her struggles with Bellator behind her and I think the move to Invicta was a positive step in her career. Maia will be no push over but I think Gurgel possess the skills to come out on top. Pick – Gurgel via Unanimous Decision.

JACK BRATCHER: This should be a fun fight. You’ve got the dynamic striking of Zoila Gurgel versus Chute Boxe fighter Jennifer Maia. Four of Maia’s six wins have been via submission and you can bet Gurgel has been working on her sub defense a lot since her last fight. This will be Maia’s U.S. debut. I’m a little concerned about Maia’s size and her clinch game and if she can get the fight to the ground Zoila could have some trouble, but I think Zoila’s athleticism, speed and technical striking will win her the decision.

GARY THOMAS: Lauren Taylor was impressive in her last fight for Legacy but lets be real honest, the level of competition has drastically skyrocketed. I am a Kaitlin Young fan and I think she has all the tools to finish this fight fairly quick. Pick – Young via KO Round 1.

JACK BRATCHER: This will be the biggest fight of Taylor’s career. She has five pro fights and five TKO finishes. Young has shown some vulnerability to fighters with strong ground and pound and guess what Taylor does very well? You guessed it. I see Taylor taking this with yet another TKO stoppage.

GARY THOMAS: Julia Budd’s title run has hit a bump with the addition of Cyborg and the injury to Ediane Gomes. Look for her to take some frustration out on Estes. I don’t think she can finish her but I do foresee an impressive finish! Pick – Budd via Unanimous Decision

JACK BRATCHER: This should be a fun fight. Although it’s only Estes’ third pro fight, she had a nice run as an amateur with all her wins coming via stoppage. Budd has absolutely faced the tougher competition and because of that high level experience I’m going to have to give her the edge. However, Estes probably has the ground advantage and if she gets Budd down, the more experienced pro could have her hands full. Budd via TKO.

GARY THOMAS: Bec Hyatt is riding a wave of hype. She looked fairly tough against Carla Esparza but I don’t think she will look as impressive against a true striker. Jasminka Cive has that dangerous standup that if Rowdy wants to stand and trade she may get the bad end of the Austrian’s fist. I like Cive in this won. Pick – Cive via TKO Round 2

JACK BRATCHER: There’s a lot of bad blood coming into this one. How can you not love Bec Hyatt? She’s a firecracker but I think she’s got her hands full with kickboxing champ Jasminka Cive. She’s a very powerful striker and brings the heat strong and fast. Four of her five wins have been via (T)KO and the other a submission win. I’m taking Jasminka via TKO.