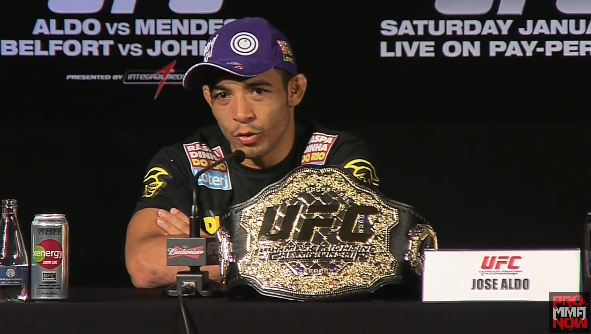 The UFC announced the planned fight a couple of weeks ago which is set to take place in August. However, White indicated that Aldo and camp didn’t believe Pettis has earned the title shot according to his manager Andre Pederneiras.

“Andre Pederneiras was in England and he sat down with me and Lorenzo [Fertitta] and was like, ‘We don’t think he deserves it,'” White explained. “What do you mean you don’t think he deserves it? ‘Well, he might be the number one guy at 155, but how does that make him the number one guy (at 145)?’ Are you out of your f***ing mind? Are you serious? Did you seriously just ask me that question? It’s like if Aldo wanted to move up to 155, are we going to say he’s not the No. 1 contender? What are you talking about?”

Well, the fact of the matter is that White indicated that  UFC featherweight Ricardo Lamas would get the next title shot after dismantling Erik Koch at the UFC on FOX 6 event in February. In fact, Koch was scheduled to face Jose Aldo for the title in 2012 but never got the opportunity because of injuries. Lamas has rattled off four consecutive wins in the featherweight division, including three consecutive wins over top 10 featherweights.

Pettis on the other hand has won three consecutive fights as a lightweight with only one of those wins coming against a top 10 lightweight.

Lamas clearly deserves the title shot, but Pettis is a bigger household name. If Aldo’s contract is structured so that he receives a PPV % then he absolutely should take the Pettis fight, but I’m not sure if his contract is set up that way.

Maybe this is all a ploy by Aldo’s camp to renegotiate for more money regarding a new contract? I’m not sure, but Aldo does have valid  reasoning regarding Pettis getting the title shot.

The funny thing is Aldo hasn’t lost in almost eight years and has defended his UFC featherweight title four times in less than two years. He has cleaned out the division aside from Lamas who has emerged as of late, yet he can’t pick and choose who he wants to fight. However, GSP can choose to duck a rightful number one contender in Johny Hendricks to fight Nick Diaz who hasn’t fought in over a year and is coming off a loss?

White went on to say that the fight between Aldo and Pettis was going to happen, and if Aldo didn’t come around to the idea he wouldn’t be happy with how things turned out.

I bet if Aldo was averaging over 400,000 PPV buys for each of his fights this wouldn’t be an issue.