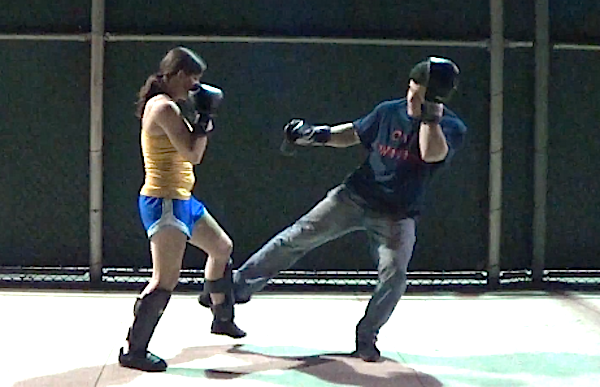 Hello everyone, I hope you enjoyed Part 1 of Wolfman Breakdown of Cub Swanson vs Dustin Poirier and the use of Calf Kicks!  Now in Part 2 we not only will be looking at the benefits here of being familiar with these kicks, but also look at the benefits of the two fake punch to kick attacks that Cub Swanson used in the fight with videos on how to do them.

Another video teaches another calf kick entry to punching combination and goes into countering Calf Kicks (Super Low Kicks or Calf Kick Sweeps) in much greater detail!  Also, I would like to point out before Liz Carmouche fights for Ronda Rousey’s UFC title this week, that Liz attempted 10 Super low kicks (missing 1, with 1 also being countered by a straight right) both to the inside and outside against Kaitlin Young at Invicta FC 2 in her last fight.  At Invicta FC 3 plenty of the women were using these attacks as well!

Now let’s look at the benefits of being used to Super Low Calf Kicks and able to counter them!

Now let’s look at the benefits of using fake punches to kick combinations like Cub Swanson used against Poirier!

These are the types of uncommon or unorthodox techniques that I try to push out there in the MMA community to constantly evolve the sport as best I can!  I share them on The Underground forum at MixedMartialArts.com where many fighters lurk, here at ProMMAnow.com, on Facebook with lots of fighters, and some fighters I share via email my Advanced Catch Wrestling DVD as well as other select videos that help their specific style.

My DVD’s are 2 Hr ($32) or 4 Hr/2 Disc packs ($35) full of information with helpful menus and a 10 Hr/5 Disk MMA Package is only $90.  Go to http://www.TheCombatSystem.com to check them out as well as some of my fights, grappling highlights, sparring footage, and TV/Film Stunt footage & Acting appearances.

Now, Watch these informative videos below and then don’t forget to refer back to Part 1 to ingrain this knowledge as self-knowledge you can train and use in sparring!

Guide to Calf Kick Counters and the outside Calf Kick to Overhand Punch combination!
http://youtu.be/bgQHUCUb00k

Three live examples in sparring of the outside Calf Kick to Overhand Punch & potential Cross/Straight!
http://youtu.be/aHiU4nck8Vg

Live Drilling of the Outside Calf Kick to Overhand, Cross Combination and defense!
http://youtu.be/IiAnp0ip4VI

Learn the Fake Hook to Kick Combination Cub Swanson used (he used his to the calf)
http://youtu.be/QEvAFSxpNxg

Here is a video I filmed years ago of the similar Bas Rutten style technique to set up the Liver Kick!
http://youtu.be/klaORy7lKE8

Learn the Fake Overhand to Delayed Over The Top Dip High Kick Cub used many times on Dustin!
http://youtu.be/IWzjMZzkkfo

Visit Dan “The Wolfman” Theodore’s website at http://TheCombatSystem.com and check out his more than 800 MMA training videos by SUBSCRIBING at http://youtube.com/DanTheWolfman1.