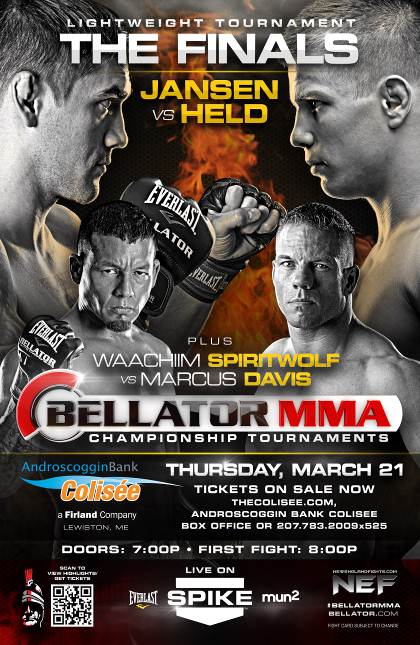 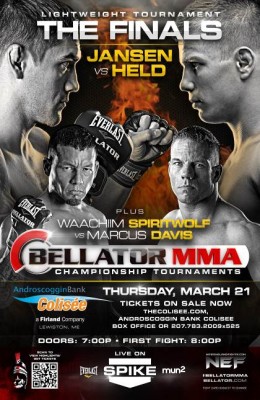 The Bellator 93 event is set for March 21 in Maine at the Androscoggin Colisee, and will be headlined by the Lightweight Tournament Final between Marcin Held and Dave Jansen. Both fighters will be vying for the $100,000 prize and a lightweight title shot.

Tickets for the event are on sale now and can be purchased at TheColisee.com, the Androscoggin Bank Colisee Box Office or by phone by dialing 207-783-2009. Tickets range from $40-$125. The event will broadcast LIVE starting at 10 p.m. EST on Spike, as well as in Spanish language on mun2. The preliminary card will be streamed LIVE and FREE on Spike.com starting at 7:30 p.m. EST.

Held enters the tournament final with a 15-2 record and the opportunity for a guaranteed title fight with a victory over Jansen. Jansen enters the bout on a five fight winning streak and spoke on the biggest fight of his career:

“I’ve had a lot of time to work on my game plan and really focus on this fight on March 21st,” Jansen said. “Marcin has the total package when it comes to submissions, so I know what I need to focus on to win this fight, and get a shot at the Bellator title.”

“Having the chance to fight for a promotion like Bellator in front of my friends, family and fans is a dream come true,” Davis said. “It’s great to find a new home and fight for one of the biggest promotions in the world.”

The full card for Bellator MMA from Lewiston, Maine can be found below: