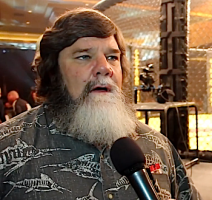 After four years on the sidelines, 47-year-old UFC legend David “Tank” Abbott will make his return to mixed martial arts against Ruben “Warpath” Villareal on April 13 at King of the Cage at Gold Country Casino in Oroville, Calif.

The bout will be held just two weeks before Abbott’s 48th birthday, and Villareall is 43-years-old, so this will be a fight between two seasoned warriors for the King of the Cage (KOTC) Superfight Title.

It is also a bout between two fighters with sub-.500 records. Abbott’s record stands at 10-14, while Villareal is 20-25-3. One of the main differences in the two though, is Villareal has remained active, fighting multiple times a year, whereas Tank has not.

Tank won his last fight via 29-second KO against Mike Bourke at War Gods in February 2009 (well he did have that backyard MMA rematch with Scott Ferrozzo in 2011). Prior to that he had lost four in a row; three by knockout, one by submission — including a first round knockout loss to Kimbo Slice at Elite XC in 2008.

Let’s be honest, what fans loved about Tank was not his great technical ability or the hope that he’d someday become the UFC heavyweight champion.

What they loved was his nasty attitude and his balls to go in there and throw down toe-to-toe with anyone, let the leather fly and let the best man remain standing. Out of 24 total fights, Tank only went the distance three times (one win, two losses).

King of the Cage owner Terry Trebilcock Jr. commented on the MMA return of the legend:

“Tank Abbott basically built the sport of MMA and brought it into the mainstream when he started fighting in the mid-90s. There is no true MMA fan in the world who doesn’t know who Tank Abbott is and we’re thrilled that he has picked King of the Cage to resume his fighting career when he could have fought in any event in the world.”

Fans enjoy watching Villareal fight for much the same reason as they love Tank. After all, he didn’t get the nickname “Warpath” because of some elusive play-it-safe style.

Villareal  fought and lost twice in 2012, dropping a third round TKO to Carl Seumantutafa and a submission to Tom Sauer. Just prior to that, in Dec. 2011, he knocked out UFC legend Don Frye in the first round to win the Gladiator Challenge Light Heavyweight Title (and just prior to that he’d lost five in a row).

Tank took some time off these last few years to write a 300,000 word trilogy about the origins of cage fighting entitled “Before There Were Rules”. His first novel, “Bar Brawler” is currently available for purchase as a paperback or digital download on Amazon.com. The remaining two novels in the trilogy, “Street Warrior” and “Cage Fighter”, are due for release later this year.