Nelson vs. Kongo and Davis vs. Magalhaes added to UFC 159 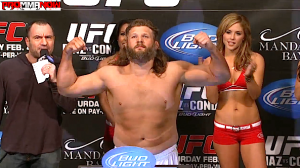 The UFC 159 event that’s set for April 27 has added two new fights according to the UFC Tonight show that airs on FUEL TV.

UFC heavyweights Roy Nelson and Cheick Kongo will battle it out, and UFC light heavyweights Vinny Magalhaes and Phil Davis have agreed to face one another.

Nelson (18-7) has won back-to-back fights and finished both opponents in the very first round. He’s (3-1) in his last four fights with the lone loss coming against top heavyweight Fabricio Werdum.

Kongo (18-7-2) is coming off a unanimous decision win against Shawn Jordan at UFC 149. Kongo is (4-1-1) in his last five fights with three finishes against those opponents.

Phil Davis (10-1, 1NC) is coming off a second round submission win over Wagner Prado at UFC 153. Wagner and Prado had a fight that ended in a no contest prior to that fight.

Magalhaes (10-5, 1NC) is coming off a second round submission win against Igor Pokrajac at UFC 152. It was a triumphant return to the UFC after losing against Eliot Marshall at UFC 97.

UFC 159 will be headlined by the UFC light heavyweight champion fight between champion Jon Jones and challenger Chael Sonnen. The event will take place at the Prudential Center in Newark, New Jersey.