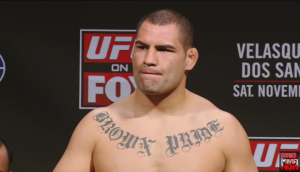 The UFC 155 event has come and gone and we have some answers to previous questions and new questions due to how some of the fights went down.

As always, I put on my UFC matchmaker hat and see who some of the winners and losers could face moving forward. Check it out below:

–Cain Velasquez: Just fought a perfect fight against Junior dos Santos and will probably fight Alistair Overeem next should Overeem get past Antionio “Bigfoot” Silva in his next fight. Silva would likely have to beat Overeem and another fighter before fighting Velasquez since he got obliterated less than a year ago by him.

–Junior dos Santos: He’s in a tough spot as he has beaten almost every top heavyweight out there. So more than likely he will have to rematch someone. Roy Nelson gave him his toughest fight prior to the loss to Velasquez. Nelson just knocked out Matt Mitrione a couple of weeks ago. So either a fight with Nelson, or a fight with Josh Barnett if he returns to the UFC over from Strikeforce once he finishes his final fight there next month.

–Jim Miller: A Gilbert Melendez fight would be the perfect fight. I think Melendez should have to get one win in the UFC before getting a title shot. The Strikeforce lightweight champion hasn’t looked like a top lightweight in his last two outings. Miller is a top ten lightweight and would give Melendez some UFC credibility and exposure in building up to a title fight with casual fans who don’t know who he is at this point.

–Joe Lauzon: Somebody said if you can lose a fight and still win…Joe Lauzon did it on Saturday night. Wow, he’s a warrior and gave Miller all he could handle and then more. A bout with Rapael dos Anjos would be fireworks.

–Constantinos Philippou: Tim Boetsch shouldn’t not have been ranked as high as he was. But he did win two fights over top ten opponents whethere it was via sheer luck or whatever you want to call it. Philippou wrecked him after a difficult first round. It’s true Boetsch got injured in the fight, and got headbutted(unintentional from what I could tell)…but he seemd to gas more than anything which spelled the end for him as Philippou poured it on late in the fight. A bout with Yushin Okami or Brian Stann makes sense.

–Derek Brunson: Solid win for Brunson after taking the fight with Chris Leben on one week notice. A bout with someone that’s near the end of their career like Rich Franklin makes sense, or another up and comer. Brunson simply needs more experience in the cage as he improves his skillset.

–Eddie Wineland: Probably has earned the next title shot against the winner of the Renan Barao/Michael McDonald fight.

–Jamie Varner: A win against the TJ Grant/Matt Wiman fight would make sense.

Leave me your thoughts and feel free to agree/disagree in the comments sections.