Does Ronda Rousey have the star power to headline a UFC PPV? 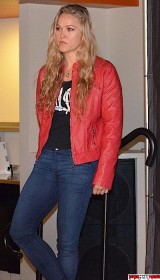 There’s been quite a buzz surrounding the announcement that Ronda Rousey will be defending her UFC bantamweight women’s title against Liz Carmouche in the main event of UFC 157. UFC President Dana White has made it no secret that the only reason women will be fighting in the UFC is because of what Ronda Rousey has done over the past year.

She has racked up six wins in just over a year, with all of them coming via first round submission via armbar. She has been the main event of two Strikeforce events that have aired on Showtime, and has appeared on numerous TV outlets and magazines. It also doesn’t hurt that she’s a former Olympic bronze medalist(Judo) in 2008 and easy on the eyes.

I’ve read that many people do not think that Rousey has the star power to headline a UFC PPV and/or  simply are not willing to pay money to see a PPV headlined by women fighters. It’s true that Liz Carmouche isn’t known at all by casual fans even though she is a talented fighter. The rest of the card does not feature a true PPV draw with Dan Henderson vs. Lyoto Machida slated for the main event. So we have to ask the question:

Does Ronda Rousey have the star power to headline a UFC PPV?

The fact of the matter is the UFC will be using this event to see just where Rousey’s star power is. If that wasn’t the case, they would have put her in the c0-main event slot of an event headlined by another UFC champion or a UFC on FX event.

IF the UFC 157 event does anywhere near 250-300,000 PPV buys it would have to be considered success. So let’s take a look at some factors that may point to Rousey being able to get in that ballpark:

Showtime doesn’t reach a lot of homes and a 500,000 viewer average on that network is pretty good. In fact, those two shows are the fifth and sixth most watched Strikeforce events on Showtime. The UFC brand name itself is a biggie here. I’m sure they are many fans that buy UFC events simply because it’s a UFC event, regardless of who’s fighting. Also, events like UFC 125, UFC 130, UFC 131, and UFC 133 all did 300,000 PPV buys on average and only one of those events had a title fight while being relatively weak cards on paper.

Rousey will be on major promotional outlets while promoting this fight. In fact, she’s already been making the rounds on shows like Jim Rome, and I’m sure she’ll be on ESPN and more. The fact that the UFC owns the footage to her fights means they can use it on those promotional networks to showcase her ability inside the cage. Finally, the UFC 157 event will feature a title fight and for whatever reason, events with title fights always seems to do OK with relation to who’s on the card.

If the card hits the 250-300,000 range then the UFC will know it has a potential PPV star on it’s hands. Let’s not forget that it took Anderson Silva a LONG time to become a legitimate PPV draw even though he’s been beasting opponents for the last six years.

If the PPV bombs and doesn’t hit 200,000K PPV buys( I find that hard to believe), then the UFC can put Rousey on a UFC on FOX show to give her more exposure and then try the PPV avenue at a later time.

I think the buzz for Rousey and the women making their UFC debut will be a little bigger than people want to give it credit for at the moment. No doubt a large portion of it will depend on how the UFC decides to promote the fight leading up to the event. However, I do think Rousey has the star power to headline a UFC event, and we’ll certainly be revisit this article in February.

4 thoughts on “Does Ronda Rousey have the star power to headline a UFC PPV?”