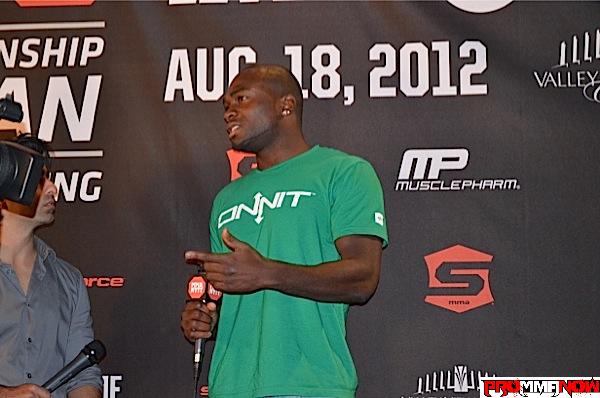 Former Strikeforce middleweight Derek Brunson will make his UFC debut against Chris Leben at UFC 155. Brunson will be stepping in for Karlos Vemola who had to withdraw from the bout due to an injury.

Brunson (9-2) is  coming off back-to-back losses including a first round KO loss to highly regarded Ronaldo “Jacare” Souza in August.

The former UNC-Pembroke All-American wrestler had rattled off nine consecutive wins prior to the two losses. He was expected to appear on an upcoming season of “The Ultimate Fighter”, but those plans were put on hold at the very last minute due to Strikeforce’s contract with Showtime.

Leben (22-8) is coming off a year long suspension following his TKO loss to Mark Munoz at UFC 138 in November 2011. Leben knocked out MMA legend Wanderlei Silva at UFC 132 prior to the loss to Munoz.

UFC 155 will take place in Las Vegas at the MGM Grand Garden Arena on December 29th.