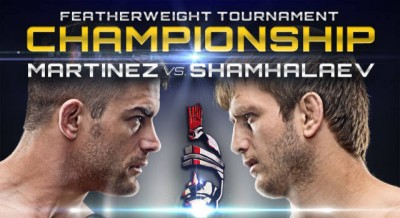 The Bellator 83 fight card is locked and loaded for Atlantic City, New Jersey, on December 7th. The event will be headlined by a Lightweight Tournament Finals fight between Rad Martinez and Team Bombsquad’s Shahbulat Shamhalaev. Also on the card, Bellator Women’s Champion Zoila Gurgel taking on Jessica Eye and the return of former Bellator Bantamweight Champion Zach Makovsky.

The event will broadcast LIVE starting at 7 p.m. EST on MTV2 and in commercial-free HD on EPIX. The preliminary card, featuring some of the area’s top local talent will be streamed LIVE and FREE on Spike.com starting at 6 p.m. EST.

Tickets for Bellator 83 are on sale now and can be purchased at Ticketmaster.com or at the Caesars Box Office. Tickets are priced from $52-$165. The fight card is below:

Be sure to make ProMMAnow (www.prommanow.com) your home for Bellator 83 news and coverage.