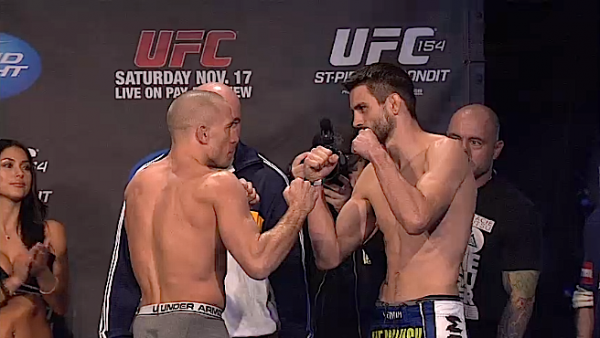 Georges St- Pierre dominated the action for much of the championship main event against Carlos Condit at UFC 154. His performance was not without adversity however.

A head kick uncorked from Condit in the third round nearly changed everything, but “GSP” showed why he is the best welterweight of all time as he came back from the knockdown to take a lopsided unanimous decision victory with scores of 49-46, 50-45, and 50-45.

St- Pierre wasted little time getting to his signature style of applying the pressure to start the bout, backing up Condit as the interim title holder looked to get his kicks on track. A couple of nice exchanges ensued, but it was “GSP” that perfectly timed a single leg shot off of a Condit kick that took the fight to the mat for the first time. From there St-Pierre went to work with short elbows and right hands. A late elbow opened up a gash over Condit’s right eye, and as the blood flowed, “GSP” looked to take control from the top early. Condit was very active from his back, firing off strikes and looking for an opening for a submission attempt as the round ended.

Condit came out a bit hesitant in the second as St-Pierre again applied the pressure. “GSP” went to his own kicks, targeting the head of Condit as he mixed in a stiff jab for good measure. St-Pierre again would take the fight to the mat, timing a kick and executing a perfect double leg technique. Condit remained very active from his back looking for submissions while peppering St-Pierre with elbows from the bottom. In true St-Pierre fashion however, he continued to rain down punishment from above, leaving Condit a bloody mess as the second stanza ended.

Condit finally opened up in the third, putting together his signature punch-kick combinations. After landing a straight left hand, Condit launched a head kick that landed flush on the temple of “GSP” sending him reeling to the canvas. Condit pounced, dropping elbows and right hands from the top. St-Pierre regained his faculties after some time on the bottom, getting back to his feet and restarting the grueling battle on the feet. Another takedown by St-Pierre proved to be pivotal, as he spent much of the rest of the round on top in control of position. Condit again remained very active as the fight headed to the championship rounds, but it was evident that he would need a finish if he was to dethrone St- Pierre.

St-Pierre continued to grind out the last two rounds, getting multiple takedowns and employing more ground-and-pound. Condit fired off pinpoint accurate combinations but could not keep the fight standing over the final 10 minutes.

As the bout came to an end, it was Georges St-Pierre in a familiar spot, on top and in control as the judges tallied their scores, and he was awarded a unanimous decision victory after 18 months of inactivity due to his knee injury.

The win improves Georges St- Pierre to 23-2 (17-2 UFC). It also marks his tenth straight victory as he continues to build his legacy as the greatest welterweight of all time.