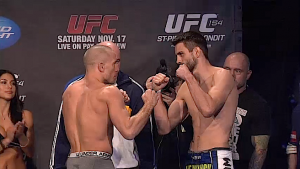 UFC 154 took place on Saturday night in Montreal and was headlined by the UFC welterweight title fight between Georges St. Pierre and Carlos Condit. Those two fighters won “Fight of the Night” with St. Pierre taking the unanimous decision over Condit.

The wrestling of St. Pierre was too much for Condit as he was able to take him down at will and control him on the ground while also opening up a huge cut near his eye. However, St. Pierre had to survive a headkick in the third round that had him in serious trouble, but Condit was not able to finish the job and St. Pierre was able to regain control of the fight.

Johny Hendricks took out Martin Kampmann in highlight reel fashion to earn the “KO of the Night” bonus. The fight began and neither fighter landed anything significant until Hendricks threw combination which ended with his left hand connecting on Kampmann’s chin. Kampmann fell straight back with his head hitting the canvas and Hendricks followed up with a punch before the referee could bring a stop to the bout.

Ivan Menjivar earned the “Submission of the Night” bonus with a first round armbar victory over Azamat Gashimov. Gashimov took the fight to the ground wear Menjivar threatened with an armbar in which Gashimov defended, but then Menjivar locked in a belly down armbar which forced Gashimov to tap.